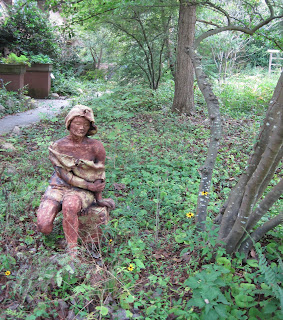 Sculpture at the North Carolina Botanical Garden
I am developing a new theory, the Theory of Hortonnection.

My theory is that gardeners are more connected to one another than the general population is connected to one another. Maybe it’s because we all have a drop or two or gallons of chlorophyll in our blood, so we all hang out at the same places? Or maybe it is that phenomenon of “hortotropism” that attracts gardeners to each other and causes us to just strike up conversations with others who look like gardeners and if it turns out we were right, it takes off from there.

Soon we discover all kinds of garden-y connections to one another, which I call hortonnections. (Horticultural Connections)

Last week I traveled to Raleigh, North Carolina to attend my first Garden Writers Association Symposium. Like any good infrequent flier, I arrived at my departure gate at the airport with oodles of time to spare and after wandering around the terminal sipping my iced green tea and admiring how beautiful our new airport is, especially the mural of Indiana wildflowers in security that I didn’t take a picture of because my focus was on not looking like an infrequent flier as I navigated through the security process, I decided to sit down and not think about flying.

Ooommmm, I would think about the fun of meeting up with other gardeners, and not about flying. Ooommmm. Flowers. Ooommmm. Plants.

Sitting there at the gate was a woman with a bag imprinted with “master gardener”. Within a matter of a few seconds, the chlorophyll in my blood rushed to my head and I thought “gardener” “flying” “Raleigh”… could she be going to the same symposium? So I asked and she was! She was none other than Carolee from Carolee’s Herb Farm, which I had heard of but have not visited, yet. We introduced ourselves and talked a bit about going to the symposium, and Carolee talked about how she was going to meet up afterwards with one of her former employees who had moved to North Carolina.

Whatever mechanisms are used to determine seat assignments must have figured out we were both gardeners and put us in seats across the aisle from each other, giving us the opportunity to continue our conversation as we flew to Raleigh. While sharing tidbits of information about gardens, gardening, and gardeners we knew, we figured out that Carolee’s best friend lives next door to my sister’s sister-in-law and I had actually visited her best friend’s garden about ten years ago and had lunch with her.

And that’s a great example of a hortonnection between Carolee and I. It sure is a small gardening world.

Now fast forward to earlier this week, when I got an email from Carolee about having dinner with her friend in Raleigh, her friend Sally, who turned out to be the same Sally I met in the garden, the same Sally I went to high school with. Yes, another hortonnection…

Have you got that all straight now?

So based on these meetings, and other meetings of gardeners, my theory, the Theory of Hortonnection, is that all gardeners are connected much more closely than the Six Degrees of Separation that we are all supposedly connected by.

Maybe these connections are because of the chlorophyll in our blood, or the tiny leaves entwined around our DNA? Or maybe it is indeed because our shared obsession with plants and gardening takes us to many of the same places? Whatever it is, I am no longer surprised when I talk to other gardeners and find out the close connections, the hortonnections, that we have in common.
My theory needs a few more examples to test it. If you have a story of a hortonnection, please let me know!

Thanks to Hoosier Gardener, Jo Ellen Meyers Sharp, I now know that the mosaic mural at the airport was created by Dixie Friend Gay. It is a beautiful mural! She sent me an email with this picture of it. 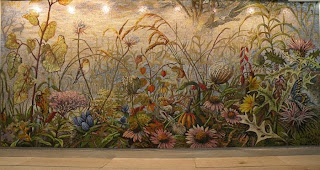