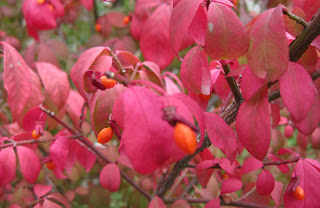 Far and away, the most read post on this blog is one I published three years ago today called “The Truth About Burning Bush”.

In just this past year, it has been viewed over 18,500 times, according to the Google Analytics tool, and people spent more time on that post, on average, than they spent on any other post on this blog in the past year.

In fact, over the last year, it has had more page views than the next 12 most read posts, combined.

What makes that post so special? What secret words, phrases, sauce or other markings does it contain that causes Google to serve it up so often? Are people viewing it to find answers to questions about the Biblical burning bush?

I have no answers to those questions.

When I look back at that post now, there are certainly some paragraphs I would re-write but I wouldn’t change the basic information. My position is still the same…

Don’t plant burning bush, Euonymus alatus, in your garden, especially in areas where it is considered invasive.

Don’t allow yourself to be seduced by those red leaves in the fall, which are at their peak right now.

Avert your eyes when you see the rows of one gallon pots of burning bush at the garden centers.

Ignore that misleading ‘Compactus’ or ‘Compacta’ because it is still going to get between six and ten feet tall and just as wide.

Remember that burning bush is considered invasive in several states, including Indiana, and is banned in Massachusetts.

Don’t even think about buying it and then pruning it each year into a nice square or a round ball shape.

Move along, the burning bush’s week of glory will soon be over and it will quickly go back to being just a plain ol’ shrub. Its flowers are barely noticeable in the spring.

Really, you can do better than a burning bush. And remember…

Muhammad khabbab said…
Well this advise is only for those where it is not invasive at all. This plant is not common here nor in india although a related species Euonymus japonicus is grown here. I love these red leaves too much and i can understand if gardeners are enchanted by its beauty.
Mon Oct 19, 06:21:00 AM 2009

Dwayne said…
For folks that just cannot be convinced that the burning bush is irreplaceable, look into mid to high varieties of Blueberry bushes.

The leaves turn a bright red in the fall very similar to burning bush, but it is not invasive.

Of course, another benefit is the blueberries, but even if you don't eat them yourselves, you have given the birds that visit your landscape a nice meal.
Mon Oct 19, 06:57:00 AM 2009

CanadianGardenJoy said…
I have to say I am looking for all of that height to block off a neighbor's house which is up against my back fence .. and I am also looking for something plain to act as a foil for the plants I want to highlight.
So here at my little place in Ontario, this IS actually what I want to use for those exact characteristics .. Carol it all depends on KNOWING exactly what you WANT and what the plant delivers : )
But this is a great post for gardeners who didn't know these facts ?
Joy : )
Mon Oct 19, 07:01:00 AM 2009

Rock rose said…
I need to go and read all about it although I don't think we grow that bush here in Texas. We certainly could do with a bit of that color- everything is rather flat here.
Mon Oct 19, 07:41:00 AM 2009

Lisa at Greenbow said…
I didn't realize it was invasive in IN. Hmmmm My dear FIL gave us three of them years ago. They still reside here. Funny that your most looked at post is about burning bushes. Probably as you say bible readers wondering about that bush then they learn something new.
Mon Oct 19, 07:43:00 AM 2009

Unknown said…
There are other alternatives, such as Itea virginica, 'Henry's Garnet' or Little Henry. 'Henry's Garnet' is in the 4x4 foot range and Little Henry is about 2 feet tall and 3 feet wide. Each has spectacular fall color that stays on the shrub until November or December, usually much longer than burning bushes. As an added bonus, these plants have fragrant, white bottlebrush flowers in early summer. Another shrub for fall color is Fothergilla.
Mon Oct 19, 07:50:00 AM 2009

Unknown said…
Indiana and other Midwestern gardeners might find publications about invasive plants helpful. There are a couple, one that is a collaborative effort of about 20+ groups, including the Indiana Nursery & Landscape Association: http://bit.ly/2JoZep
and the other from the Indiana Native Plant and Wildflower Society, http://www.inpaws.org
Mon Oct 19, 07:55:00 AM 2009

Dave@The Home Garden said…
There are quite a few alternatives to planting burning bush. That fall color does get a lot of people planting them. Since they are also very cheap it becomes pretty attractive for those who don't know about its invasiveness.
Mon Oct 19, 08:26:00 AM 2009

Commonweeder said…
I agree with Dwayne that a great alternative to burning bush is high bush blueberries. I am constantly amazed at how many burning bushes I see in our area and they no longer look pretty to me because I know how invasive they are, and I get so angry thinking that you can still buy them at nurseries. I also warn people against buying them.
Mon Oct 19, 08:38:00 AM 2009

mss @ Zanthan Gardens said…
If there are paragraphs you want to edit, why don't you? Isn't that the power of blogging, of self-publishing? You are in control.

Mr. McGregor's Daughter said…
There are so many, other shrubs with great fall color, there really is no excuse for this plant being sold anymore. The only reason I have one is that it was here when I bought the property and was already so big that removing it is going to take some major work.
Mon Oct 19, 09:31:00 AM 2009

Rose said…
I think it's funny that this post received the most hits; as Lisa said, I have a feeling many of them were looking for Biblical interpretations.

I had no idea burning bushes were considered invasive, but this is one time I'm going to have to disagree with you, Carol. We have three large bushes that were planted at the end of our yard before we ever moved here, and I love their bright red color in the fall. The problem, I think, is that people don't realize how big they can get and use them as foundation plantings. If I ever remember to take my camera along, one of these days I'll take a shot of three of them planted at the local community college. They have been pruned as trees and are really eye-catchers at this time of year.
Mon Oct 19, 09:56:00 AM 2009

Helen said…
I haven't heard of it being invasive up here in Toronto (USDA Zone 5, Canadian Zone 6), but have noticed -- after killing mine off during a couple of droughty seasons -- that it has self-seeded in a few places in my garden. So perhaps it's something we'll be awakened to soon.

Note that those droughty days were intensified, because my garden is shaded and sucked dry by Norway maples (Acer platanoides), an alien species widely planted as street trees. It produces so many viable seeds as well as deep shade that it is seriously crowding out our own native sugar maples (A. saccharum) in the city's wild spaces.

Eighty years ago when these trees were planted, few people thought about such dilemmas. Nor when someone imported starlings to the New World... And, I suppose, in all honesty, we Europeans could be seen as an invasive species here, too.
Mon Oct 19, 10:10:00 AM 2009

Alison said…
It's not invasive here in the PNW, but IMHO, it is not just ordinary, it's ugly, even when the leaves are red. There are so many wonderful native alternatives with prettier, colorful leaves, and other wonderful properties. There is no reason to plant it.
Mon Oct 19, 02:31:00 PM 2009

Anonymous said…
All of your post are well written and they get picked up by certain list. This one got a snowball effect and so it keeps rolling down hill collecting more snow. Good for you as it was a good post and full of very useful information.
Mon Oct 19, 03:05:00 PM 2009

Unknown said…
Blueberries need an acidic soil and most of the soil in the lower Midwest is alkaline. When we grow them here, we plant them in boxes so the soil pH can be controlled.

For a taller plant with good fall color, consider some of the Viburnums, such as V. dentatum.

Last spring at the garden center where I work, a customer came in and wanted to know what she could put on her burning bush to get it to be that red color.
Mon Oct 19, 04:04:00 PM 2009

Karen said…
I do have to chuckle here. When we moved into our new home two years ago. we transplanted several burning bushes to an area where we hoped to grow something (anything) to stop erosion. Alas, I cazn't even seem, to grow an invasive plant. I won't be planting any more and these ones haven't really grown in 24 months. The blueberries however, are growing just fine.
Mon Oct 19, 05:53:00 PM 2009

Claire Brown said…
I think we can only have the compactus form available here (Surrey UK)as they never seem to grow more than 3ft x 3ft, and i've never know them to sow seeds. I love the Autumn colour, but agree they are boring green the rest of the year
Mon Oct 19, 06:20:00 PM 2009

Mary Delle LeBeau said…
The red leaves are hard to resist, but not when you know how invasive this plant is. Can't believe your post has had that many reads. I'll have to go back and look at it.
Mon Oct 19, 08:30:00 PM 2009

Unknown said…
I certainly didn't realize they were invasive, they are easy to maintain staples of the Toronto, Canada gardens.

garden girl said…
Amen Carol. I hate to say it, but we have a hedge of 17 of them between our front yard and a neighbor's, planted long before my husband bought this place. I would so love to take them out - them, and the rest of the front 'landscape,' which includes a 40-year-old Bradford pear (also said to be invasive,) and overgrown yews. Ugh!
Tue Oct 20, 10:12:00 PM 2009

Kathy said…
While we may think invasive species like the Burning Bush is harmless, we must remember that the birds eat the berries and then eliminate the seeds indiscriminately. The Burning Bush has no competitor so eventually takes over areas that should be growing plants that are native (natural) to your area. Species from Asia are not native to us.
Tue Aug 01, 04:11:00 PM 2017