Embrace Composting For A Happier Life 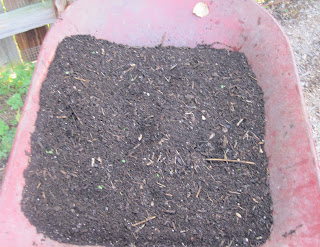 Some gardeners have a dirty little secret that they don’t want anyone to know about. They think they are hiding it well, but one look around their garden and it is obvious.

They don’t have compost bins or any means to compost the refuse from their garden. I don’t know what they do with all their plant clippings and leaves and apple cores and leftover jack-o-lanterns, and I’m too polite to ask. But I won’t judge them, either, because each gardener has their own circumstances and must live with their own actions.

There are all kinds of excuses for not composting…

Some gardeners think that composting is a lot of work. There’s all that talk about turning the piles, after all, which involves a pitchfork or shovel to “turn” the compost, usually by digging the compost out of one pile and onto another.

Some gardeners think that composting is complicated. It sure sounds complicated when you read about the “proper” ratios of green (wet) matter and brown (dry) matter. And then there are compost starters for sale at the garden centers. How much of that do you need? And what if the pile is too wet. Or too dry?

Some gardeners think that compost piles are ugly and that they smell. They think it looks like a pile of debris and wonder what the neighbors will think if the wind blows the wrong way.

Well, forget all that, none of it is true!

Composting doesn’t have to be a lot of work. You can add to a pile and just let it sit without turning, if you’d like, and eventually, you’ll have compost. It may not be as fast as you would get compost if you occasionally turn the pile, but that pile will eventually break down into compost.

Composting isn’t complicated. You can just pile up whatever you have from your garden, “greens and browns”, with no store-bought compost starters, and you’ll eventually get compost.

Composting doesn’t have to be ugly and it shouldn’t smell. You can put a screen around the compost pile to keep it from being seen or purchase a tumbler or other plastic unit and hide it behind a big shrub. And if the pile is getting enough air and isn’t full of stuff that shouldn’t be in a compost bin anyway, it won’t smell.

I started out early this morning harvested the compost that had miraculously appeared since the last compost harvest. This involved removing the uncomposted debris from the top of one pile, then shoveling out the compost underneath. I used a homemade compost sieve to screen out some of the uncomposted debris in some of it, (screened compost pictured above) but as I dug further down into the pile, I found I didn’t have to screen out debris as much.

Then I put the uncomposted “stuff” back into that empty bin and proceeded to fill it with uncomposted debris from the second pile, and repeated the process of harvesting compost from that second pile. Then I moved on to the third pile and did the same.

Once I had the compost harvested, I got out my chipper-shredder and went around the garden cutting back some of the perennials and sending them through the chipper. This reduced what were once big piles of debris into bite-sized pieces, which will compost much faster. (The more I use that chipper, the more I love it, but that's a topic for another post.)

Now I’ll just leave the compost bins for the winter, adding whatever kitchen scraps I have leftover that I can’t use in the worm bins in the sunroom and let compost happen. 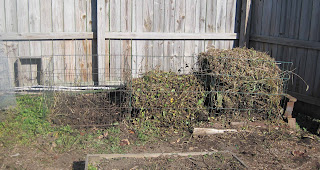 The compost bins at May Dreams Gardens
compost embrace