November 29, 2009
Yes, even I braved the traffic, crowds, and fast talking salesmen (thankfully, there wern't that many fast talking salesmen) to go to a few stores this weekend. I needed something from the hardware store and more food. Rest assured that I chose stores that were as far from the madding crowd as I could get. And I shopped for food when the Colts football game was on TV, further guaranteeing that there wouldn’t be many other people shopping at the same time.

At the hardware store, I took the long way around so I could pass by the houseplants and saw these “just add ice orchids™". 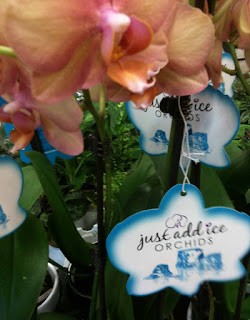 This is the second store I’ve seen them in, so it looks like they are making the rounds. The instructions say to just add three ice cubes every week to water the plant. They could not have made it sound easier, could they? So simple! Just take the cubes of the frozen form of water and let them slowly melt on top of the bark they grow these orchids in and you’ve completed your watering duties for the week. And on their website, you can even register your email address and they will send you a weekly reminder to go get those three ice cubes and “water” your orchid.

But in my opinion, it is so wrong! The proper way to water an orchid, or any indoor plant for that matter, is to first determine that it actually needs to be watered, timing of which will vary depending on the conditions where it is growing, including the humidity level, then thoroughly water it, letting water drain out the bottom.

I don’t think that’s very hard to do, is it? Why this ice cube gimmick? Have we become that lazy? I wonder if the growers used ice cubes to water these orchids? I’m guessing they didn’t!

I’ve posted before about not watering with ice cubes. At work one year, they nearly killed several poinsettias by watering them with ice cubes. The cubes melted, but the water only penetrated about an inch down in the soil - the rest of the root ball was as dry as dust! I would guess the same would happen with these orchids. Three cubes a week would not thoroughly wet the growing medium.

Someone give it a try and convince me otherwise. Until then, I’d say if you want one of these orchids, get one because they are pretty. Just please water it with room temperature water when the bark begins to feel dry and water it thoroughly.

Speaking of poinsettias, at the big box grocery store, I had my first sighting of painted poinsettias this year. 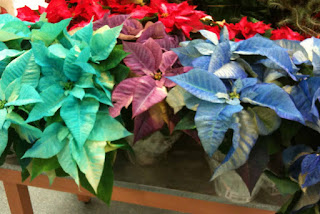 These were first introduced a few years ago, as I recall. I don’t like them and I have never found anyone who does like them or who will admit to liking them. But somebody must be buying them because the growers would not go to the added expense and effort to paint them just to paint them.

So who is buying them and why? What ever happened to just plain red poinsettias?

These painted poinsettias and the “just add ice orchids™" have to be the fault of marketing groups. Who else could be responsible? The consumer for buying them?

I just can’t imagine a gardener, a plant lover, falling for either one. Can you?
indoor gardening orchids