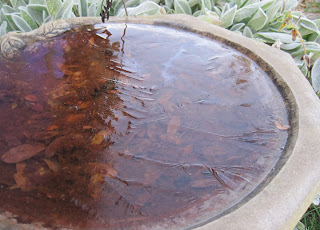 We get an extra hour today!

How are you going to spend it? Who is going to decide how you spend?

Unfortunately, like it or not, how we spend an hour is often decided by others around us, by forces and fates that are not ours to control.

Today, a force referred to as “Jack Frost” has decreed that the extra hour gained today by turning back the clock an hour will be spent in the garden preparing for the annual visit of “Old Man Winter”.

Jack Frost is a demanding task master and insists that as soon as that block of ice melts in the birdbath, I need to clean that up and stow it and most everything else on the patio under a big brown tarp. Out in front, I need to gather up the containers on the front porch, clean them out a bit, and move them to the garage for safe keeping.

Jack has created a sense of urgency to do it sooner rather than later. He always does.

You see, once Jack has paid a few visits to the garden, Old Man Winter isn’t too far behind. And Old Man Winter doesn’t like for things to be left outside! He kicks them and breaks them with his freezing and thawing. He covers them with snow, pelts them with sleet and occasionally adds a coating of ice for good measure. He can throw an awful tantrum if he sees something left out in the garden that should be put away for the winter.

And he is particularly unkind when it comes to containers.

The big question for gardeners is whether to store containers over the winter with the soil still in them and use that soil again next spring, or dump all the dirt out, scrub the pot clean and add all new soil in the spring.

There is of course, conflicting advice on that subject.

Many sources insist that pots should be clean and the soil mix fresh to ensure that your plants get the best start possible in containers in the spring. They make it seem as though plants will simply not thrive in your dirty old pots with that tired soil from last season!

But many gardeners, like me, know that some of those containers are big and heavy, even without the dirt, and to remove all that dirt every year just seems like a lot of work and a waste of money. Our dirty little secret is that we often leave most of the dirt it our pots from year to year. We don’t even scrub the containers out between uses.

And I think it is fine that we do that.

Really, let’s just think this whole "clean pot, sterile soil" idea through a bit. Do you think for one minute that plants that are planted out in the actual garden have a “clean pot and sterile soil”?

Cast aside that whole "clean pot, sterile soil" idea! What I generally do is pull the plants out of the conainers in the fall and scoop out some of the top layer of dirt and throw all that in the compost bins. Then in the spring, I sift through the dirt in the pot and pull out any roots or plant debris I might have left, maybe even scoop some more of it out if it looks kind of gray and tired, then mix in some new dirt (container planting mix) and plant.

Time and again, season after season, I’ve done this and I have yet to see any terrible disease on a plant in one of my containers. And yes, of course, if a plant had a bunch of disease, I would completely empty the pot it was in and rinse it out. But I don’t ever recall a container plant becoming diseased in my garden. Occasionally a plant doesn’t do well in a container, but that isn't usually because it was sulking about the dirty pot and “used” soil.

I hope this was helpful. I hope I've freed you from the tyranny of the clean pot.

I hope you'll understand that there is more I could write on this, but, I’ve got to hurry now, Jack Frost is nipping at my nose!
fall

Jo Ellen Meyers said…
Nice post, Carol. You have such an unique way of looking at things, such as Jack Frost and Old Man Winter as the men in our gardening lives. Thanks, too, for granting permission to keep the soil in pots and sharing the tip of inverting nursery pots to take up volume and reduce the need for potting mix.
Sun Nov 01, 08:50:00 AM 2009

CommonWeeder said…
I'm freed! This will save a little money too. I used my extra hour to go out and continue the fall clean up. I dug out a HUGE siberian iris clumb, and threw it by the side of the road where earlier 'discarded' clumps are doing very well indeed. I don't think you can kill Siberians.
Sun Nov 01, 04:28:00 PM 2009

Vickie said…
We've already had our first snow, 18 inches, a few days ago. So Jack Frost whacked us upside the head. I leave my containers up front as some have bulbs. I clean out the non-bulbed ones and the dirt goes in the veggie garden before we till in the spring.
I am glad I am in good company.
Sun Nov 01, 05:44:00 PM 2009

MLight said…
I have happy pots of salvias and cleomes from the previous year's seeds. This wouldn't happen if I cleaned out the pots every year. Occasionally, I even have a bit of an annual that nobody pulled out which survives in the pot in the crawl space.
Sun Nov 01, 11:09:00 PM 2009

Darla said…
Jack Frost has not made his way down south yet...I have always found it funny that people scrub their containers only to 'dirt'y them again!! I have plants that return in the same containers...and you would never see me through perfectly good dirt away!
Mon Nov 02, 06:48:00 AM 2009

Marie said…
Thanks for the freedom. Clean pots are something I think about but never get around to doing.

I dump the pots every year on my dirt pile in order to stack them in the garage. I mix dirt from the pile with new potting soil and perlite in spring and reuse it. I use soda or beer cans in the bottom of my pots to take up space. I have never had a problem.
Mon Nov 02, 06:55:00 AM 2009

Rose said…
I spent my "extra hour" yesterday catching up on blog reading, including watching the rest of the "Night Gallery" episode--couldn't wait to see what revenge the garden had for Mr. Saunders:)

I am in complete agreement with you on containers, Carol, and glad to know you follow the same steps I do. I have some rather large containers and it seems such a waste to throw out all that dirt every year. Adding about 1/3 of new soil each spring has worked well for me, too. Often, I don't even touch them in the fall--those dead plants add a little "winter interest":)
Mon Nov 02, 10:56:00 AM 2009

EAL said…
As I think you know, I am totally with you on the reuse of big pots with dirt from last years plantings, unless the plants in question became so rootbound, they've used it all up. That happens a lot, unfortunately.
Tue Nov 03, 10:41:00 PM 2009