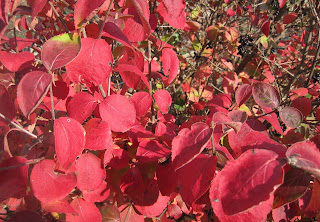 Raise your hand if you thought that the Viburnum genus was still in the Honeysuckle family, Caprifoliaceae.

Yes, I thought so, too, and many online resources and books still include it in that family. But it appears that after careful review using molecular phylogeny, botanists decided that the genus Viburnum should be moved to the Moschatel family, Adoxaceae.

Molecular phylogeny? I also naively thought that botanists looked primarily at flower structure to determine what family a plant should be in. Apparently somewhere along the way, botanists started looking at molecular structure to group plants together. What would Linnaeus think of that? What do you think of that?

This new-to-me plant family, Adoxaceae, which is in the same Order, Dipsacales, as Caprifoliaceae, started out with just one a plant, a little herbaceous number called Adoxa moschatellina. Pictures of it look vaguely familiar, like I’ve seen it somewhere before so I’ll have to watch for it now, just because I’m curious about it.

But it doesn’t look a thing like its newest family members, the Viburnum species, which are generally woody shrubs - much loved woody shrubs, if I may say so myself. But I guess molecularly, that little Adoxa and the Viburnums are more closely related than Viburnums and Honeysuckles. Who are we to question it?

Raise your hand if you know of the other two genus in the family Adoxaceae?

Even if we don’t know the answer, we can easily use online resources to find out. What would Linneaus think of that?

The other two genuses are Sambucus and Sinadoxa. And just like the genus Adoxa, there is only one Sinadoxa, Sinadoxa corydalifolia. Unlike Adoxa, however, we are all unlikely to see a Sinadoxa, because it is a native to one specific region in China. (A little botanist humor, what do you call an Adoxa that does something bad? A Sinadoxa!)

One last botanic tidbit, I promise, maybe, at least for now. Do you know what a genus with only one species, like Adoxa and Sinadoxa, is called? A monotypic genus. I feel certain that tidbit is going to come in handy sometime - at a party, over the upcoming holidays, perhaps the next time you are admiring the yellow foliage of Ginkgo biloba, which is another monotypic genus, and is in fact the only genus in a monotypic family. Often called a living fossil…

Whoa, oops. Not sure where I was going with that. Anyway, back to Viburnums…

Raise your hand if you have a Viburnum in your garden.

I think most gardeners do because it doesn’t take long after being introduced to gardening to realize that some of our most beloved and memorable shrubs are Viburnums. In fact, as long as you garden someplace where Viburnum can grow, you’d be crazy not to have a least one in your garden.

In my own garden, my stand out Viburnum is Viburnum carlesii, the Korean Spice Viburnum, fall foliage pictured above. It has it all - spring blooms, good foliage all summer, excellent fall color, berries for the birds.

My sentimental favorite Viburnum is the old-fashioned snowball bush, Viburnum opulus 'Sterile'. It’s a big “wow” for a few weeks each May when its branches are weighed down with those big snowball sized blooms. I first saw it blooming in my grandmother's backyard and once I figured out what it was, I had to have one.

Plus it is a big shrub and I can hide the compost tumbler behind it. 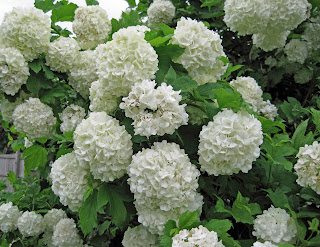