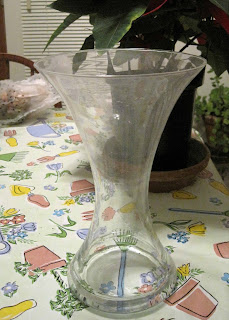 When I first spotted the amaryllis vase at the now defunct Frank’s Nursery and Crafts, over ten years ago, I thought, “what a great idea”.

I immediately wanted it. I already had several hyacinth vases and every winter used them to force hyacinth bulbs into bloom, so why not branch out into amaryllis bulb forcing with a vase?

So I bought the vase and an amaryllis bulb and set it up just like I set up hyacinths. I filled the vase with water - just enough so that when I set the bulb on top, it was almost touching the water, but not in the water – and set the bulb on the vase.

The bulb grew roots and a shoot and soon there was a tall flower stalk just about ready to bloom. Everything seemed to be working out, just like with hyacinths, when without warning…

The bulb and flower stalk fell over sideways.

I realized then that I had no way to support the flower stalk in the vase and it was too top heavy to stand upright on its own. So I let the bulb bloom sideways and then put the vase up on a high shelf, never too be used again.

Then the other day, I noticed that Mary Ann of Gardens of the Wild, Wild West, was setting up little scaffolds made out of sticks and raffia to support her amaryllis bloom stalks. Eureka! That’s what I needed to do! I needed to put sticks in the vase sort of “teepee style” before I set the bulb on it and use those to support the bloom!

So that’s what I just did. I put some sticks in the vase and will add some raffia later to keep the bloom stalk upright. 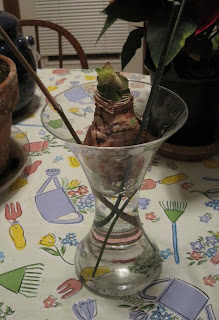 Already, after just 24 hours, the amaryllis bulb is starting to grow some new roots and the tip seems to have grown some, too. It’s eager to bloom, and I’m eager to see if I can keep it supported this time.

~~~~ A Few Miscellaneous Notes ~~~~
(Note 1: Some of you will wonder why I kept an amaryllis vase for well over ten years if I didn’t think it was going to really work as designed. Fellow gardeners, please tell those who are wondering why I kept this vase just how difficult it is to get rid of anything related to gardening, anything that might be useful in the garden, or anything with any connection to gardening, if you are a gardener. Thank you.)

(Note 2: Somewhere I have a Christmas table cloth for the sunroom table. I meant to find it and put it on the table before I took pictures of the amaryllis vase, but I didn’t. Let’s all pretend I did.)

(Note 3: The amaryllis vase has been on a high shelf in the sun room for, um, at least ten years, and I obviously haven’t dusted it in at least, well, let’s say five years. I did clean it out before I added water this time.)
bulbs indoor gardening