Games for Current and Future Gardeners 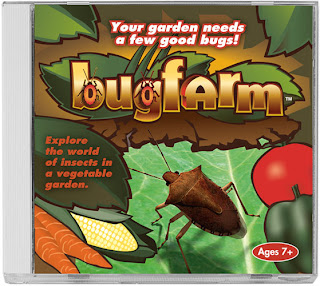 Remember when you were a baby boomer kid and you got a new board game? First thing you did was find the instructions and read them from beginning to end to see how to actually play the game.

And remember how complete those instructions were? They covered everything you could think of, including how to decide who should go first and whether to go clockwise or counter clockwise to figure out who went second.

Today, I own two such board games. Any guesses as to which ones? I’ll give you a hint… one of them ends with “opoly” and the other ends with “game”.

Both start with “garden”.

Yes, that’s right, here at May Dreams Gardens, the only two board games in the house are “The Garden Game” and “Garden-opoly". (Yet more clues that there might be a gardening geek around here…)

Both games are in mint condition, too, because I have yet to find anyone who really wants to play them with me. But they are nice to have just in case.

Now, have you ever seen kids get a new computer game to play in this day and age? The first thing they do is load it up on the computer and then start clicking on different parts of the screen to see what happens. They might click on a “?” in the upper right hand corner if they can’t figure something out right away, and that usually produces a screen showing key combinations that cause different things to happen. But they don’t stop to read any instructions, per se.

Yet somehow, kids figure the game out. I’ve seen it for myself.

A few weeks ago, I got a copy of the computer game Bugfarm™ to review. It’s geared toward ages 7 – 12 so I immediately thought of enlisting the help of my eight year old nephew to try this game out. He said he'd be happy to help! So on Thanksgiving, I loaded Bugfarm™ on to my laptop and took it with me to the family dinner.

After eating a huge big plate of turkey and all the fixin's and topping it over with some chocolate cream pie, my nephew took over my laptop and proceeded to start playing Bugfarm™. 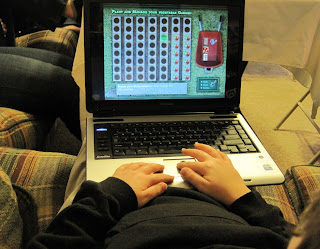 “Hey, do you think we ought to look at the website first and watch a demo of the game before you just start clicking on stuff”, I asked.

“Cool”, he said, not actually in response to my question, but because he had just encountered the first insect, a spined soldier bug.

The next thing I knew he was in the virtual potting shed loading up a virtual wheelbarrow with seeds, fertilizer and water and taking it all out to plant in a virtual garden patch. I don’t remember too much else, because at that point I wandered off to do something else, as clearly he didn't need my help to read any instructions. I checked back later because he had drained the battery on the laptop and needed the power cord, and there was a giant spider and a bird on the screen that we all thought might try to eat the spined soldier bug.

Since he seemed to like the game, I gave him the DVD to take home and load on one of his family’s computers. Then a few days later I called over there to ask him if he still liked it. His older brother answered and said he’d go get him, but he wasn't sure he could get him to come to the phone becuase was playing that game I gave him at Thanksgiving.

Finally my nephew came to the phone and said he was working on harvesting his vegetables and taking them to the market to sell. And he’d gotten the spined soldier bug to fly.

Yes, it appears that as he plays this game, he is actually learning something about insects, gardens and plants.

Overall, he gave Bugfarm™ a very solid four out of five stars. His only other comment was he wished it came in a version that he could play on his Nintendo DS.

Yeah, me, too, because then I would know exactly what to get him for Christmas.

As for me and my two board games, well, once I find a couple people who would like to play them, I’ll get out the instructions…
reviews