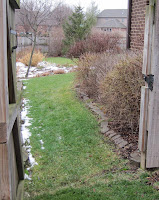 The old rabbit, Nine, or Aught Nine as some called him, peered through the garden gate looking for signs of his replacement - a young, energetic bunny named Ten.

“Where is he”, said Nine to no one in particular. “I’ve got some advice for him and it’s almost time for me to leave!” While he waited he shifted his weight from one foot to another and wondered if his fur would ever dry out after that cold, wet summer. He checked his bag again to make sure he had everything he should take to The Past. It was heavy and hard to carry.

Just then he caught a glimpse of Ten hopping toward the gate.

With the same boundless energy and enthusiasm that Nine remembered once having, Ten arrived at the gate with one last big hop and a skidding stop and greeted Nine with an exuberant, “I’m here!”

“It’s about time”, said Nine, thinking all the while that Ten seemed just a bit too new, too green, too… something that he couldn’t quite put his finger on. “Oh,” he remembered “Ten is the first bunny of a new decade, that’s why he seems different.”

“Ten, I’ve got just a few more hours before I turn the garden over to you. Please listen carefully as there are some lessons I learned that I want to share with you before I go. I think they will be helpful.”

So Nine pulled out the list he’d made during the last few days of the year, looked it over, and decided he really didn’t have all that much advice to offer, so he would make it brief. Besides, there wasn’t much time left!

“Ten, you’ve got 365 days before your replacement shows up. My advice is to do some hoeing when you can to earn your keep around the garden, but remember that “all hoe and no play” isn’t good for anyone. Try to get out of this garden on occasion to see what other gardens are like out there. And if you see a plant or flower you want, grab it. If you wait, it might be gone if you try to go back for it. Finally, have some fun along the way.”

Ten took notes, nodding his head as though he understood. It sure sounded easy enough!

“And one other thing, when those other rabbits come to the garden for various holidays be sure to…”

In mid-sentence, Nine looked at his watch and exclaimed, “Oh dear, my time is up. I’ve got to go. Good luck, Ten. I’ll see you next year in The Past, where I’ll be from now on. Auld Lang Syne and all that and have a great year!”

And with those last words, Nine grabbed his bag and disappeared into the fog, leaving Ten at the garden gate, trying to remember the advice he’d just been given, wondering what he was supposed to be sure to do when those other rabbits showed up.

But even without knowing all that he was supposed to do, he was very excited about the new opportunities he would have, the adventures he’d go through and quite ready for the chance to show how well he could tend the garden until his own replacement arrived.