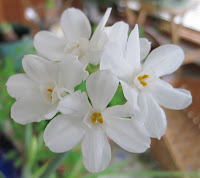 It’s a rare event, as rare as a blue moon, when Dr. Hortfreud, Hortense Hoelove, the garden fairies and I all meet at the same time.

I sort of forced the meeting, knowing it would be a risky encounter, if it even took place at all. I didn't know if  Dr. Hortfreud knew Hortense or if the garden fairies would actually show up, even if I implored them to do so.

But none the less, there we all were meeting together and debating over a retrospective post for 2009.

Should it be based on my favorite posts? Dr. Hortfreud felt that was a bit self-centered and suggested it be based on what appeared to be the readers’ favorite posts. Hortense offered that the posts she wrote were best and should be the only ones listed. But that didn’t sit too well with the garden fairies, who felt like their posts should get top billing.

Oh my, this meeting was not going well! I, the self-appointed president of the Society for the Preservation and Propagation of Old-Time Gardening Wisdom, Lore, and Superstition (SPPOTGWLS or “the Society”), and a member in good standing of the Society of Gardeners Aged Fifty and Over (SGAFO) am used to meetings that get loud and rambunctious, but this meeting was beyond even some of those!

Finally, I took control of the meeting and told them all to pick just one favorite of the posts they wrote, and I would include them on the list and then do my own picking to finish it off.

Dr. Hortfreud chose her first post to include on the list which annoyed Hortense, who wanted to do the same but felt like it would be too "copy cat" to do that. After recovering from her little snit, she decided to go with a post in which she answers questions about flowers. Dr. Hortfreud and Hortense are quite alike in many regards, both dispensing advice, but each does so in her own way.

The garden fairies wanted to go back further than 2009, arguing that I should allow posts from the entire decade, so I picked one for them about a tiny mint flower. In choosing for them, I realized that those lazy garden fairies had only written two guest posts in all of 2009, the other one being about my new camera. They need to do way more than that in 2010!

The Theory of Hortonnection about how all gardeners are connected in some way.

Everything I Learned About Touring Gardens, I Learned at Montrose because it will always remind me of my first Garden Writer’s Association symposium.

A Gardener’s Guide to Quantities and the related posts on time and distance.

The Letters to Gardening Friends, that I wrote all through the vegetable gardening season…

At this point, Dr. Hortfreud tapped me on the shoulder and suggested that I was missing the point about a blog retrospective for the end of the year. She said it wasn’t really about the posts, wonderful as I thought they were, and that it was unlikely that many people would click through to actually read them.

She said it should really be about how having the blog introduced me to many wonderful gardeners near and far, and opened up some other opportunities throughout the year that might never have come my way without the blog.

And of course, she was right.

Happy New Year to all!
Blogging

Commonweeder said…
Carol, You are the best! This is a great roundup - in case any of us missed the original postings. And I agree as well, put those fairies to work.
Thank you for a delightful and inspiring year. my wishes for more in 2010 - for both of us.
Wed Dec 30, 09:57:00 AM 2009

Rose said…
Carol, I would have a hard time picking your best posts of the year--there have been so many of them! My favorites are always the funny ones, but I've learned so much from all your informative ones as well that they would have to be on the list, too. Looking forward to hearing more from your guest contributors in 2010.

Melanie J Watts said…
I agree garden blogging is not just about the ideas, stories and advice one gets from reading them it is also about meeting the people behind them. Happy New Year to you.
Wed Dec 30, 11:10:00 AM 2009

leavesnbloom said…
Oh today was my first opportunity to meet Mr Hortfreud along with the fairies and Hortense. That was a very entertaining post. Did you know that there is a rare blue moon on New Years Eve this year?

Unknown said…
There is NO WAY I could pick out a favourite post of yours, Carol. Because they have all made me laugh, or made me think, or made me tear up, or taught me some wonderful useful information. Thanks for all you do, and here's to a bountiful blogiful new year!
Wed Dec 30, 11:47:00 PM 2009

Sweet Home and Garden Carolina said…
What they said, plus, I was so glad to get to meet you and welcome you to my home and garden for the Spring Fling back in May.