December 26, 2009
When I was a kid, part of the fun of Christmas was calling up friends on the day after asking “WhajagetforChristmas?” all in one excited breath, and then interrupting one another exclaiming over what we got for Christmas.

I got some antique seed packets! 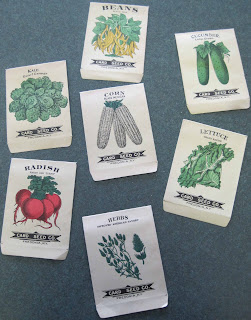 And on the back of each is some wonderful garden advice!

Like on the Dwarf German Kale, it says, “…on a moist day after the plants are three or four inches high, transplant to two or three feet apart…” Of course, transplanting is best done on a “moist day”!

On the Early Red Turnip Radishes, it says to “use invariably when young and brittle”. I love that though I’m not sure what they meant by “invariably”. Oh well, radishes are best when smaller.

On the Black Wax Beans, I found this good advice “Never work among the vines when wet, as it induces rust”. That is good advice and I've tried to follow that for years.

And on the Long Green Cucumbers it says “When all danger from insects is past, thin out the plants…” I wonder how one knows when the danger of insects is past? That seems like a good thing to know even today.

I don’t know the age of these seed packets because they aren’t dated, but I did find some information on collecting antique seed packets on The Labelman's website and see some on that site that are similar to what I got for Christmas.

Many thanks to my sister-in-law who thought to buy these seed packets way back last spring, then rigged the Christmas name drawing so she would get my name. Wasn’t that nice of her? How in the world did she know that I would like antique seed packets? Hey, this might lead to a new collection for me!

But enough about me and my antique seed packets, now it’s your turn…