Achieving Happiness in Your Garden: The Fourth Secret 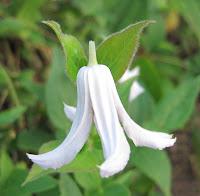 Having found three of the five secrets to achieving happiness in your garden, I was on “high alert” for signs of the fourth secret.

As I walked around the garden each day, I found myself stopping to look under every rock for signs of a piece of paper, a box, something, anything that might contain the fourth secret. Whenever I picked up an old magazine or gardening book, I caught myself not necessarily reading it, but instead looking in the margins and between the lines, hoping that the fourth secret would soon be revealed.

Then just as I was about to give up on ever finding the fourth secret, I noticed a thin thread, almost a spider web, attached to my back door. Normally, I would have just brushed it aside, but something made me wanted to follow that thread to its end point, to see what might be there.

I slowly started walking across the patio, thread in hand, and soon found myself crouched down looking under a rather large Viburnum shrub wondering if I should really attempt to crawl under there to see where the thread went.

Just then I heard a little giggle and felt a tickle on my backside, as though someone was trying to put something in my back pocket. Instinctively, I reached back and felt a piece of paper sticking up out of my pocket. I slowly pulled it out and unfolded it.

Yes, it was the fourth secret.

It was powerful. It was brief. Just three words. Three very important words.

What more could be said?

We respect Mother Nature when we accept the hardiness zone we are in and choose plants that will do well in our zone.

We respect Mother Nature when we compost and use that compost to amend the soil in our gardens.

We respect Mother Nature when we choose organic methods and eliminate the use of pesticides in our home gardens.

We respect Mother Nature when choose plants that will attract bees, butterflies, birds and other critters to our gardens.

Whenever we have a choice in our gardens, we should always choose the option that respects Mother Nature. To do otherwise will lead to frustration, heartache, worry and waste. There is no point to it when we can achieve happiness by just respecting Mother Nature

I suspected that it was the garden fairies who set up that elaborate scheme with the thread to get me to kneel down enough so they could slip that fourth secret into my back pocket. I suspected it, but I had no way to prove it, to know for sure.

The only thing I knew at that point was that there was a fifth and final secret to achieving happiness in your garden, and I would give almost anything to find out what it was.
Secrets