Hoeing by the Light of the Moon 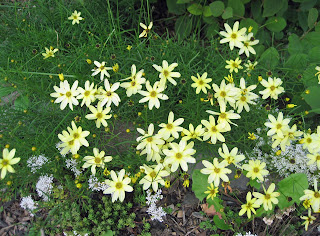 This Coreopsis ‘Moonbeam’ grows and blooms beside the entrance to my garden all summer long. I’ll use it to remind myself that this is the year I’m planting by the phases of the moon.

But the effect of the moon doesn’t begin and end with planting. Apparently it can also affect the effectiveness of hoeing.

According to the book, “Raising with the Moon -- The Complete Guide to Gardening and Living by the Signs of the Moon

” by Jack R. Pyle and Taylor Reese, hoeing, cultivating, and weeding are best done when the moon is waning, between the full moon and the new moon.

So, good days for hoeing in March will be a few days before I plant the peas or after the 29th.

Pyle and Reese also go beyond moon phases to suggest that various signs, like Aquarius, Pisces, etc. also have an impact on different activities. Some of these signs are considered barren signs and others are considered fruitful signs.

They suggest that peas be not only planted when the moon is waxing in its 2nd phase, which is somewhere between a half moon and a full moon but also when the signs are Cancer, Scorpio, Pisces, Taurus, and Libra.

After reading this, I went back to my almanac and checked March 17th which turns out to be in the moon’s 1st phase under the sign of Pisces.  “Close enough”, I say. I’m still planting my peas on the March 17th.

But I’ll probably forget about the moon phases when it comes to hoeing and pulling weeds. You know how it is. When you get that itch to hoe, or weed, you just have to go with it, regardless of the moon phase.
gardening