What Do You Want In A Garden Design 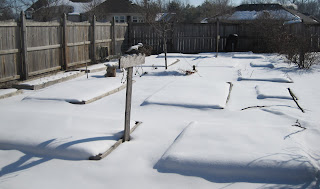 I’ve decided to consult with a garden designer to work out some issues that I have in my garden, mainly that it lacks a cohesive design.

(No, Dr. Hortfreud can not work on these design issues because she foolishly or deliberately avoided all the design classes she could while getting her horticulture degree.)

I say I recently decided, but truth be told, I’ve been thinking about garden design and getting some help with a garden design for a long time. But first one thing and then another stopped me from doing anything about it. Finally, I banished “first one thing and then another” from my mind and the garden and took the initial step earlier this week.

After asking around a bit, I picked a garden designer I thought would create the kind of design I'd like, who would be willing to work with a gardener (versus a homeowner who just wants their yard to look "nice"). On Sunday, I sent off an email to introduce myself and ask her to meet with me to discuss her design and installation services.

I held nothing back in my email to her! I told her about my garden, my habit of buying “one of’ plants and planting them wherever there seemed to be a bare batch of ground, as long as it looked like the plants behind them would be taller and those in front would be shorter. I also mentioned that I form emotional attachments to some of my plants. Don’t we all?

I wrote that I wanted to work with a garden designer who thinks it is a good idea to devote a third of the back yard to vegetables, knows what a copse is (and can design one), and understands that I will continue to buy “one of” plants and want to plant them in the garden without compromising whatever garden design I’m working with.

I gave her all the background I thought necessary, even suggesting that I was willing to remove or move plants that might get in the way of a good garden design. (After I deal with any emotional plant attachment issues.) I bared my gardening soul in that email, but stopped just short of mentioning the hoe collection and how many garden fairies I think are out there wandering around the garden. I wanted her to reply to my email, not run away.

And she replied. Turns out she bought the same variety of melon seeds that I did for the same reasons. I think that’s a good sign.

The next step is to meet and look around the garden and discuss the services she can offer. I’m sure when she sees the garden as it is now, or how it will be when we meet, she’ll have a few more specific questions about what I want in a garden design, other than a vegetable garden, a copse, and the ability to plant whatever I want and not ruin the design.

I wrote them down so I wouldn't forget them, but I did so in the dark with a pen that was stingy with its ink because the five elements came to mind right before I fell asleep one night.

Now I just need to decipher what I wrote...
garden design