Garden Design Update: I Have Seen The Plans 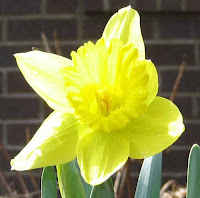 I have seen the future of my garden, and I like it.

The Garden Designer and her Partner in Digging returned Monday evening with garden plans to review and discuss. The Garden Designer went over a detailed plan for the front and a concept plan for the back. I like what I saw. The future looks very bright for my garden. The ball is rolling, as they say, and I’m excited about all of the next steps.

Over the next several weeks, we will move on to cost estimates, patio design, refined plant lists, and hopefully soon, put a shovel in the ground and get started.

In the meantime, I’m going to work on the vegetable garden, which will remain where it is.

I read some interesting ideas in the book the Garden Designer left me, Gaia’s Garden: A Guide to Home-Scale Permaculture

by Toby Hemenway, and have decided to apply one concept, that of keyhole gardens, to the arrangement of the beds in the vegetable garden, if I can do it before the May planting season arrives. Many of the wood sides of the beds need to be replaced anyway, so would it be that much more work to move the beds?

That’s a rhetorical question, you don’t need to remind me of how much more work it could be to move the beds.

Let's make that a "maybe I’ll move the beds around". We’ll see how much time I have in April to do such a project.

The concept of a keyhole garden is to arrange the garden beds like keyholes to increase square footage but maintain the same accesibility to all sides of the raised bed. A simple example is if you have two 4’ x 8’ beds with 4’ paths all the way around them, you will have 64 sq. ft. of planting area and be able to reach across all the beds to the center of those beds.

But if you take the same 4’ x 8’ beds and add a 4’ x ‘4 bed between them at one end to form a “U” shape, you now have another 16 sq. ft. of planting area, plus you can still reach into the center of each bed, from all sides. You’ve formed a key hole of sorts to get to some of those areas.  My example is squared off, but many keyhole gardens are round.

Does that make sense?

Many keyhole gardens are also raised up three feet or more to allow you to reach the beds without bending or stooping. I don’t plan to raise my beds to that level, but I think I’ll try to carefully reposition them to use the concept of a keyhole for accessibility, to see how much more planting area I can add. Of course, I have to do this without messing up the peas, sweet peas, lettuce and spinach that I’ve already planted.

And while I’m at it, I’m going to move the compost pile to another location in the garden so it isn’t so visible from the house. That’s on the garden plan, too.

Or maybe I’ll work out the arrangement for the garden this spring and summer, and move the actual beds this fall after I've harvested everything?  Yes, I think that is the more practical approach.  I'll work out the layout,  grow the garden, harvest from it, and then in the fall, which is a much better time of year for that kind of work, I'll rearrange the beds to better utilize that space.
garden design vegetable garden