the first crocus of the season. 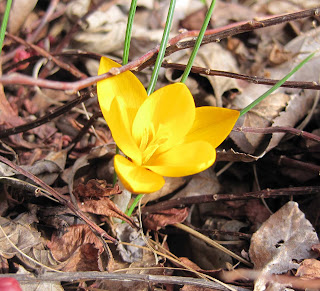 And nearby, another crocus. 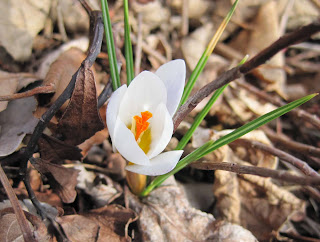 Both were just a few days later in arriving compared to when they showed up last year, but both conjured up the same exact thought…

In that brief instant of seeing that first crocus, I suddenly realized that winter really is going to end and spring really is coming. Everything I was going to do over the last few months, while the garden was buried in snow, suddenly came to mind.

I must face the music, see the sunshine, fess up that I still need to…

Organize all the seeds to make sure I have all that I “need’!

Gather up my seed starting supplies and get going on the tomatoes, peppers, and eggplant!

Figure out if and how to replace the raised bed frames in the Vegetable Garden!

Meet with the garden designer!

Prepare to meet with the garden designer!

Take down the Christmas lights! (Just kidding, I took them down when it got up to 15 F one day in early January. The sun was sort of shining, as I recall, so it didn’t feel that cold. Really, it wasn’t that bad.)

Water the houseplants! (Kidding again. I’ve kept them watered this winter… sort of.)

Then just after I had calmed myself down by shaking a few seed packages and listening to the calming rattle of the pea and radish seeds, my very next thought was…

I should have (fill in the blank)!

Oh, the remorse of time spent idly waiting, watching, and whining for winter to end and spring to arrive! I can not be the only one filled with regret that I frittered away the hours of winter and have so little to show for my time. I must pay the piper, own up to my laziness, accept that I should have…

Cleared out the dining room of all that stuff I stashed in there “awhile ago” to get it out of the way.

Cleared out the spare bedroom where I moved some of the stuff that I wanted to donate.

Finished my catalog of what grows in my garden. Oh, wouldn’t that be handy to show a garden designer?

Cleared some more bookshelf space so that the newer gardening books don’t have to be stacked on the floor in front of the bookshelf.

Planted up the terrarium.

Exercised more so I’d be in better shape for gardening.

Then I see more crocuses starting to bloom. 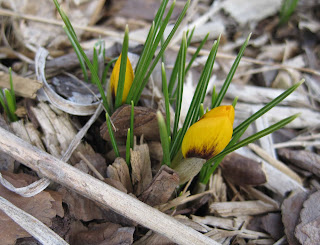 And I’m reminded that everyone has a case of the “I still need to’s” and the “I should have’s” around this time of year, as winter leaves and spring finally arrives.

The only cure is to keeping looking forward, get out into the garden, and just do what we can and let the rest be.