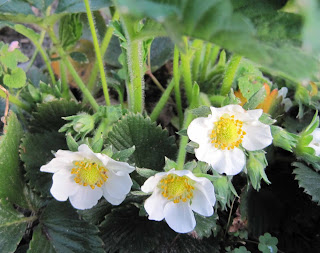 By the time you read this letter, work may actually have started on the new garden design. Not just work on paper, but actual work in the garden. I’m excited to see it begin and I'm ready for it to begin.

Also by the time you read this letter, I may not be able to move because I spent all weekend, or a good part of it, digging up and moving many plants that are good plants to keep, but just aren’t part of the new design or will be growing someplace else with the new design.

You won’t believe it, but many of the plants are being moved to the raised bed vegetable garden.

I surely don’t want that to happen in my raised vegetable garden, but I couldn’t think of any place else to put the plants, as every other garden bed will also be dug up in the hopefully near future.

This does mean that I will have to be more thoughtful about which vegetables I grow this summer, but rest assured, I’ll grow as much as I can. Speaking of which, I am pleased to report that everything planted so far is up and growing, but seems a bit on the small side. I think it is because we haven’t gotten much rain in the last week or so. I’m going to water it all this evening and fertilize a bit and see if that helps. We are supposed to get some rain at the end of the week, so that should help, too.

As you can see from the picture above, the strawberries are blooming. We had some freeze warnings the last few nights, but luckily we seem to have been spared from any freeze or even frost, so hopefully, there will be lots of strawberries to pick in May.

I hope all is growing well in your vegetable gardens. That’s not much more to do in mine, vegetable-wise, until we are frost-free, sometime around May 10th, but that’s okay because I have a lot of plants to dig up and move or give away before work begins on the garden design in the back. 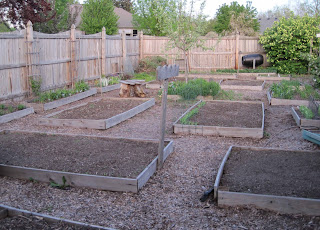 So far, just the long narrow beds along the fence are full of perennials. I also planted some clematis vines along the fence, but I consider them permanent plantings. In a few weeks, I expect at least two of the 4’ x 8’ beds will also have perennials in them.

P.S.S. Check out this species tulip I found blooming in my garden late Sunday. I’m pretty sure this is Tulipa batalinii ‘Apricot Jewel’. It, too, will need to be moved!
letters to gardening friends