Garden Design Update: A Guest Post From the Garden Fairies 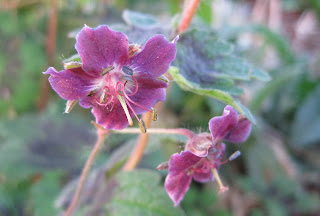 We garden fairies are in a real tither here at May Dreams Gardens. You would not even believe what is going on around here!

First of all the other morning, on Saturday, one of our very own, Columbine Goblinfly, was sleeping off an early spring party, all nestled deep within a tall sedum, when “WHACK”, a big old shovel blade came down and nearly took off her bonnet! She was so startled she didn’t know what to do, but managed to get her wits about her in the knick of time and ran out of there just as fast as she could. When she turned around, Carol, the gardener around here, had dug the whole plant up and was putting it into a plastic bag.

Tangle Rainbowfly wasn’t so lucky! He was taking his usual nap in a clump of hostas and was so out of it that we think he never did wake up when Carol dug that clump up and threw it into a plastic bag. Next thing we know, she put that bag on the back of her truck with a bunch of other bags of plants and we haven’t seen ol’ Tangle since. We think he’s over at Carol’s sister’s garden and can only hope he’s okay. They’ve got some dogs and cats and kids over there… let’s just say it isn’t the safest place for a garden fairy.

And you wouldn’t believe the mess Carol left behind after two days of digging! There are holes everywhere. Some of them are so big that it isn’t safe for us to just be out and about at night like usual. A fairy could fall a long way into some of those holes!

Fortunately, we’ve discovered that the vegetable garden seems to be a safe place, a sanctuary of sorts. Carol is actually moving some of the plants back there. That was sure good news for Ivy Iceglitter, who was trying to get to some petals of a new geranium flower to make a new hat with when the whole plant got moved. Poor Ivy hung on for dear life as that clump of geraniums was tossed into the wheelbarrow. She reports it was a bumpy ride but overall she feels lucky not to have ended up in a bag like Tangle.

Come Monday morning, things had more or less settled down around here, so we garden fairies were catching up and trying to figure out what had happened over the weekend. Suddenly without warning, there were some people in the garden that we didn’t quite recognize. Then Oak Leafweb recognized the woman as the same person who had been here a few weeks ago, walking around the garden with a camera and a notebook. We’ve since learned she’s a garden designer. She had returned! And this time there was someone else with her.

Well, before we knew what was going on, they started digging and marking stuff and since we’d never seen anyone but Carol work in the garden, we were quite alarmed. Alarmed! We were just about ready to organize ourselves to launch a full scale attack when what do you know – Carol comes out of the house and starts talking to them, all nice like, and then she leaves. We thought for sure she was going to go after them with a hoe for messing in her garden!

We don’t know what to make of all of these goings on, but Carol seems to be okay with it, even happy about it. She was back this evening, digging up our own miniature garden and transplanting everything from it into four big containers.

That might be the last straw for us garden fairies.

Out front, there are are now four big bags full of some shrubs and a bunch of Liriope spicata that got ripped out. Tonight we are going to organize ourselves a bit, which as you know is the last thing we garden fairies like to do, and start moving everyone to the vegetable garden. For some reason, it seems like it is the safest place to be right now, while these people “tear up jack”, as Carol’s grandmother used to say. Once we are all in the vegetable garden, we are going to try to account for everyone to make sure no one ended up in those bags. We shiver at the thought!

In the meantime, we’ll continue our watch from the sanctuary of the vegetable garden and report back about any further disturbances.

Signed
Thorn Goblinfly,
Chief scribe and typist for the garden fairies at May Dreams Gardens

(A note from Carol… Those garden fairies can be overly dramatic. Work officially started today on the new garden design for the front yard. I’m taking pictures as things change and will show the before, during, and after, when there is an “after” to show. In both the front and back, I’ve been digging and moving plants, planting some in the vegetable garden temporarily and giving others away. The garden is kind of a mess right now, but it will all sort itself out in the coming weeks. I assure you, no garden fairies are being harmed in the process…)