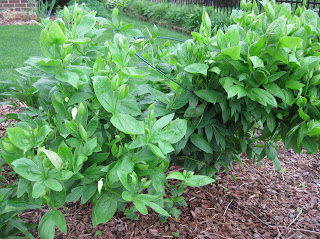 Earlier this spring, a gardener/garden writer whom I greatly admire came to see my garden.

It was actually closer to late winter when she walked around my yard, seeing mostly the “bones” of the garden, such as they were, along with the skeletons of last year's perennials and weeds.

Very few perennials had started to come up, other than a few species tulips and the early blooming irises, but it seemed to me that everywhere we looked, there were embarrassingly large colonies of weeds past and present, enough to indict me as a bit of a lazy late season weeder or to at least ruin any reputation I might have had for being a meticulous weeder. She seemed surprised to see all the weeds.

Amongst the “bones” of the garden, she could also see the support rings I had left in place for Clematis integrifolia ‘Alba’, with last year’s dried up stems still drooped over them. The picture above shows how it is growing with the support rings now, after being hard pruned in mid-March.

She politely asked me why I felt the need to support this shrub-like clematis, instead of just letting it take its natural shape, which is, well, I’m not sure what its natural shape or habit is because I’ve always kept it caged.

Or rather, I've attempted to keep this clematis caged. It never really stays entirely within the support rings that are in place for it. And once some of those stems escape, there is no trying to “capture” them again to try to return them to the confines of those rather flimsy support rings without accidently breaking them off.

I guess I don't have a terribly good reason to keep providing this clematis with support. Dr. Hortfreud might suggest that I am trying to support it, contain it, cage it, to give myself the feeling that I am in control in the garden, when really, like most gardeners, I have far less control in the garden than I think I do.

Perhaps the time has come to free this clematis and see what happens? If it doesn’t work out, there is always next season because this particular clematis is one that I prune back to the ground early in the spring. (Next season? It’s only May! It is far too early to start talking about next season already!)

This clematis will soon be blooming, with its nodding white bell-shaped flowers. 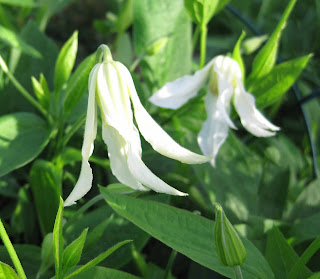 If I gently lift those rings of support over the stems now, maybe this is the year for it to bloom free… as free as the wind blows…

I did not just write that indirect reference to a song, did I? Oh dear, I did!

I also inexplicably just ordered three more Clematis for my garden. Dr. Hortfreud is going to have a field day with this...
perennials