This morning, I went for it.  I grabbed a shovel, rake and digging fork and cleared out the section of the perennial border that is being taken out to be replaced with lawn.

Here's the before picture from earlier in June. 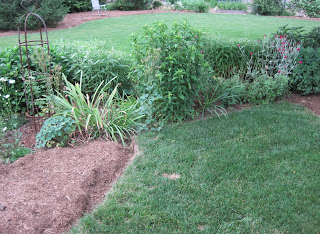 Here's the after picture this afternoon after I dug up the perennials that were there. 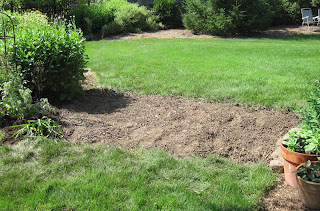 Perhaps I should not have chosen a day when the temperatures were forecasted to get close to 90 F, followed by more days of the same, to move perennials. But I did.

I just decided to do, but I don't recommend that others do the same.  Do as I say, not as I do.

The plants I moved this morning now look pretty tired, wilted, and droopy in the late afternoon sun. I'm hoping a little more water and a cool evening will help them some. I did cut them back when I moved them and do realize they may not recover.  Or they will look bad for most of this year but recover in the spring.

It was a gamble, but looking over the plants I moved, I realized that those that were "one of a kind" were not so rare that I would lament their passing, and others were one of multiples. If they don't make it, I know where I can get more of them next spring, either in my own garden or the gardens of one of my sisters.

I'll wait until early fall to sow grass seed there.