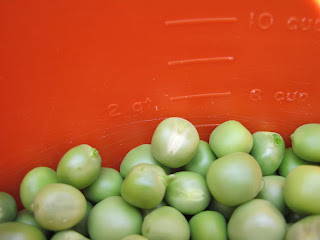 Do you know how long it takes to shell eight cups of peas? I do! I can tell you from my own experience that it takes about an hour, and that’s an hour working steadily at it with no breaks. That’s a lot of peas and my fingers were sore afterward.

People often ask me what I do with all of those peas. Well, mostly I give them away to other people who like peas.

I just eat a few of them because peas aren’t my favorite vegetable. But I will say that garden peas are much sweeter than any peas that you can buy – canned, frozen, or “fresh”. I often eat them raw straight from the pod while out working in the garden.

That’s all I really have time to report in this letter. Short and sweet, and full of peas!

Here’s a picture of the garden, taken on Sunday evening. 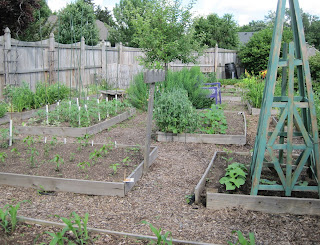 It was too wet to hoe the beds Sunday morning so I just pulled the bigger weeds, including purslane. That purslane, or “pusley” as Charles Dudley Warner called it in his book “My Summer In A Garden”, can drive a gardener mad trying to keep it out of the garden beds. Any little piece left will take root and start growing, wherever you tossed it. But I’m hopeful if not optimistic that I can "out-pull" it and someday it will be but a memory. Hope reigns in the garden!

P.S. No turning back on my patio remodel now. My nephews have started pulling out all the bricks and pulled out two thirds of them today. I joked with them that I was just having them pull out the bricks because it was a good way to weed the patio, and later I’d have them put them all back. Ha! I was the only one who thought that was hilarious. More later on the garden design progress…

P.S.S. I got a new hoe today! More on that later, too...
letters to gardening friends