New In My Garden - Diervilla 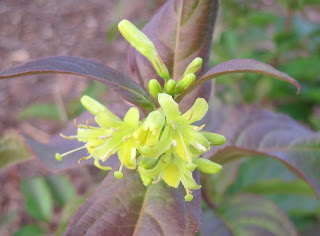 New in my garden, Diervilla lonicera.

A native shrub, one of its common names is Northern Bush Honeysuckle.  It's on Indiana's threatened and endangered list, where it is noted as "rare".

The garden designer suggested it, and I looked it up and then said yes.  I said yes to most of the plants she suggested, as I recall, and was enthusiastic about all her plant choices.

She might recall that I was a gardener with definite likes and dislikes, who had to be convinced on the merits of some of the plants she suggested.

Either way, look at that pretty yellow flower of the Diervilla, now blooming in my garden, a hint of what's to come on  Garden Bloggers' Bloom Day next week on the 15th.
shrubs

Sweet Home and Garden Carolina said…
Good choice, Carol. We designers wished we had more clients like you.

We have a variegated form of Diervilla lonicera at the garden center where I work. Most people have never heard of it.
Thu Jun 10, 12:26:00 PM 2010

Anette the Gardener said…
I've never heard about it either. But it certainly is beautiful. And I'm glad to hear that you're helping to preserve this flower.