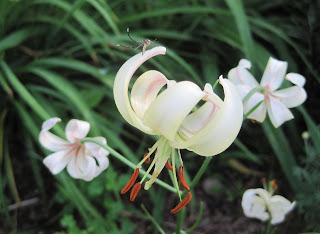 We garden fairies have some extremely important extra exciting news to share, which has caused us to write yet another guest post.

This will be our third post this year, which is some kind of record for us garden fairies. Usually we don’t like to do this much work, but when news is this exciting, we do what we have to do.

Are you all caught up on the goings on around here with the new garden design? We still don’t know what to make of it all, but we were more or less getting used to the changes when those two young fellers showed up, again, and started tearing out the brick patio, brick by brick. 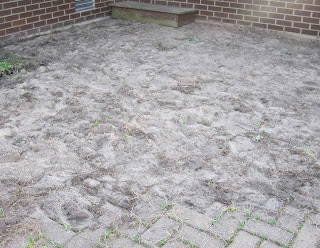 My goodness! What is Carol going to think when she sees all this? We know she’s got some big plans. We just hope these two young fellers are supposed to be tearing up this patio. We have a special fondness for it. After all this is where our garden used to be, the miniature garden. It’s long gone, but all the plants got loaded up into big containers and moved out yonder by the honeylocust tree.

(Where's the picture of the plants from the miniature garden out yonder by the honeylocust tree? I could have sworn Carol took one? She's messing up our guest post by not having a picture of the tiny hostas all potted up. Oh, wait here's one taken right before she moved them out by the tree...) 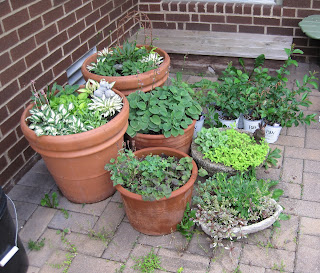 It shows that wooden step that she never did like.

Anyway, what were we garden fairies writing about? I swear, sometimes we have the attention span of a gnat. No offense to those gnats, who are our friends. They entertain us sometimes by flying around Carol out in the garden, then we howl with laughter watching her swat at them.

We do know that we like one of Carol’s new flowers, a little Lilium cerneum ‘White'. It’s pictured up top of this post. You see that little bug on top there? Carol zoomed that right in and turns out that is a mosquito! 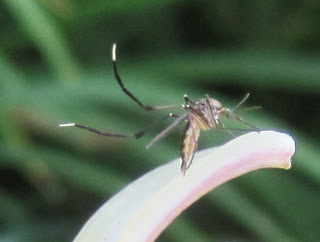 Even we garden fairies don’t like mosquitoes. They can suck all the… well never mind. We do like that pretty little lily and we like that she planted it near some foxglove, another favorite flower of ours. 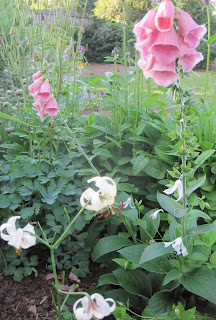 Did you ever see those spots on the inside of a foxglove flower? Carol always says those are fairy foot prints, and she’s right about that. But it’s our secret how they get there.

Oh, wait, we writing about our big news, weren’t we.

Some of you nice readers were concerned that he ended up in a bag of plants back in April and got hauled off to Carol’s sister’s garden where there are dogs and cats and kids, oh my! Well, that’s exactly what happened! But ol’ Tangle, he’s been around a couple of centuries, so he didn’t panic. Instead he bided his time, hid from the animals and kids and then one evening, when they were all gone, Carol showed up again with some ferns.

Ol’ Tangle saw her and knew that this was his opportunity, his one chance to escape and return to May Dreams Gardens. He waited until she threw down the last bag of ferns, then just as she was about to walk away, he grabbed onto her pant leg and hung on for dear life. She never even knew and got back in the truck with Ol’ Tangle still attached. Then she drove him all the way home, still not realizing he was there. That’s because he tried to stay as quiet as can be and he held his breath, too. At one point he thought he was going to get truck-sick, but he didn’t, thank goodness. He made it all the way back and as soon as Carol got out of the truck, he released his grip on her pant leg and ran as fast as he could toward the lawn and safety.

He thinks she almost saw him because she reached down at one point and he thought she was going to touch him, but she didn’t.

We were so excited to see Ol’ Tangle again and had quite the party that night in his honor, which partially explains the footprints on the foxglove, but then we party like that every night and try to sleep all day, except when those young fellers show up and start tearing out the patio!

Anyway, as long as blooms like that lily keep popping up, us garden fairies don’t get too shook up about all the changes around here, even though there sure are a lot of them!