As The Garden Design Continues... 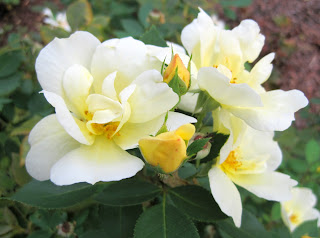 As the garden design continues…

This week, the garden designer sent me a map of the backyard with the provisional names of each garden area noted on it, and a bulleted list of the ideas and suggestions she has for each of these garden areas.

I now get to mull over the ideas and send her back comments and questions.

The reason she named each area of the garden is so that as we talk through the design, we will know which area we are referring to.

I like that she considers the garden names “provisional” because I will likely change them along the way. For example, the garden area she now calls “East Perennial Border” could be renamed something like… well a name doesn’t come to mind right now. But a name will come to me, eventually. I just don’t want to wait too long to rename a garden area and in the meantime get used to calling it something like “East Perennial Border” so that by the time I come up with another name, I have to call it whatever name I come up with followed by “Formerly Known as East Perennial Border” to keep everything straight.

At one point in reading through her current list of suggestions, I literally wanted to slap myself upside the head and say out loud, “Now why didn’t I think of that”.

As you come into the backyard and round the corner by the sunroom, there will be a garden area under the sunroom window and six or seven feet across the way, there is another garden which is currently referred to as the “West Perennial Border”. You pass between these two garden areas to get to the rest of the garden. The garden designer suggested using the same plants in each area so it seems like you are walking through one garden versus walking through two disconnected gardens.

What a concept. It would never have occurred to me. But it is exactly the right thing to do there.

She also suggested that I prune up another viburnum, this rather large Viburnum opulus ‘Sterile’ also known by the old-fashioned name “Snowball Bush”. 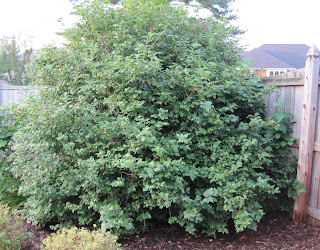 I peaked under all those branches to see what was under there and saw that it is going to require some major pruning with the reciprocating saw, loppers, hand pruners, the “whole nine yards” as they say. It’s a mess of suckers and shoots and branches.

Should I do it? It is, after all, hiding the compost tumbler in the vegetable garden behind there somewhere.

But I had so much fun pruning up another viburnum that she suggested I prune and loved how it turned out that I think I’ll give it a go… just as soon as it isn’t so hot and humid out there.