Bluebirds and Other Visitors In My Garden

July 02, 2010
It’s been a good week in the garden, graced, even momentarily, by a pair of bluebirds. 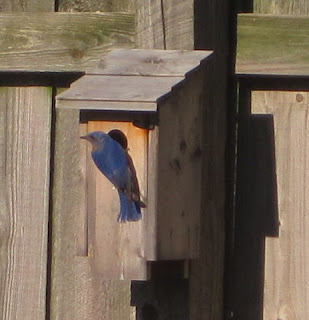 I don’t know much about birds, but I believe that there are more birds in my garden now that I’m working with a garden designer and making a few changes around this place. Even later in the evening after seeing the bluebirds, I opened the back door just as a big hawk, maybe a Cooper’s hawk, landed in a nearby tree.

Then the hawk flew off to sit on the fence, just down from where an hour or so earlier the two blue birds were taking turns checking out the birdhouse mounted to the fence. I thought I heard those bluebirds say… 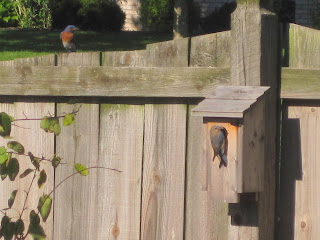 “Oh, it is nice, but it looks like they are making a lot of changes in this garden.

Yes, but they are changes for the better, I think. Let’s put in an offer.”

Of course, I am happy to let them stay for free, if they so choose. Did someone mention I should get mealyworms for them to eat?

Coincidentally, these bluebirds showed up when I was outside with the garden designer and her partner, the "hort-abler". We admired the bluebirds for awhile, checked out the patio-in-progress and discussed the next steps in the garden as I continue with this mid-life crisis garden design process.

Details on the patio-in-progress and next steps coming soon...
birds garden design