In Search of "The Diehards" 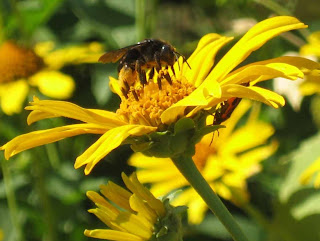 I went on a search for all the verses of “The Diehards”, a poem by Ruth Pitter published in 1941 in a book of her poems called “The Rude Potato”.

I had read little snippets taken from the poem, which often show up when you search for quotes on gardening, including:

“We go, in winter's biting wind,
On many a short-lived winter day,
With aching back but willing mind
To dig and double dig the clay.”

“All in November's soaking mist
We stand and prune the naked tree,
While all our love and interest
Seem quenched in the blue-nosed misery.”

And this verse about hoeing in July, which is the one that caught my eye first, as stuff about hoeing usually does, and started me on this quest for the entire poem.

“We go in withering July
To ply the hard incessant hoe;
Panting beneath the brazen sky
We sweat and grumble, but we go.”

Along the way in my search for "The Diehards", I found another quote by Elizabeth Lawrence,

“The hum of bees is the voice of the garden.”

Some people think I hear voices in my garden, but they aren’t thinking it is bees, more like my gardening therapist, Dr. Hortfreud. I also hear the crowd noise of the cicadas later in summer, and of course, the songs of the birds, most noticeable in the morning and evening. Occasionally, I hear the whine of the mosquitoes, usually followed by hearing the sound that my hand makes when slapping against my arm or leg.

Yes, I hear bees, too, especially as I lean down low to check on the ripening squash. Bzzzzz…

Where was I? Oh, right, I was on the trail for all of the verses of “The Diehards” by Ruth Pitter.

My Internet searches took me round and round to the same three verses. They also revealed some fascinating information about Pitter, including her long-time correspondence and friendship with C. S. Lewis and a passion for gardening.

Soon I will be able to read several of Pitter's poems because the Internet also graciously took me to sites where I could buy a reasonably priced used copy of The Rude Potato, and so I did just that. (My local library doesn't have a copy of it.)

Meanwhile, while I searched high and low for this poem, the Twitter-verse, especially Helen of Toronto Gardens, also searched for me. She found a link to the entire poem, or what I think is the entire poem. I'll post it when I post a review of "The Rude Potato".

In the meantime, here is another verse to ponder.

The sense that we have brought to birth
Out of the cold and heavy soil,
These blessed fruits and flowers of earth
Is large reward for all our toil.

I like that. It seems like the perfect sentiment to think of while working in the hot sun in the July garden, the garden that gives us so many rewards... squash, green beans, corn, tomatoes, peppers.

My other reward will be to take time to sit in the shade, to listen to the voice of the garden and read the poems of Ruth Pitter.
books

Vetsy said…
That was so nice of Helen to assist you in searching for this poem, Yes it's the perfect fit for the month of July... It's so nice to receive the fruits of our labor after all that " sweating and grumbling...

Rose said…
I don't know that I'm a diehard--this July heat and now the mosquitos are getting to me--but I love walking through the garden and enjoying "the rewards for all our toil."

Lisa at Greenbow said…
Perfect verses for this time of year for sure. I will have to try to find this book. She sounds like she is/was a serious gardener and can express herself so well.
Tue Jul 06, 11:02:00 AM 2010

Weeping Sore said…
Love your literary quotes. I can't help but remember what Homer Simpson said last night about hearing voices:
Shut up! I can't hear the song in my head.
Not as profound as yours, but up there.
Tue Jul 06, 03:33:00 PM 2010

400calendulas said…
I love garden poetry. These are the lesser known ones. My minister gave me one from "Hilda?" of Norwich I must look up. Itis still in my files somewhere. AS forsounds in the garden, once, at twlight, I walked by a recently dug up area that had had time to begin to reconstitute itself and heard thesounds of dozen of worms thatsuddenly shot back into the earth when they became aware of me.That was memorable suditroy experience.
Thu Jul 08, 11:05:00 AM 2010