Apparently I Am Growing Odd Vegetables 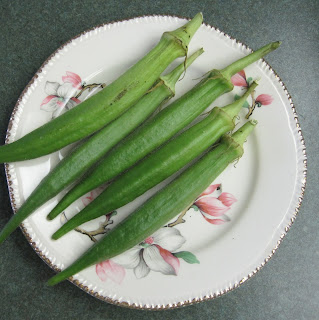 Apparently, I am growing some odd, obscure vegetables, like okra.

Five of the first five co-workers I asked could not identify the okra I brought in to work for another co-worker who specifically asked for some after I went on and on and on and on about my fried okra.

Fried okra, fresh fried okra, is very good by the way. It is not slimy.  Just like grandma used to make, except I fried the okra in vegetable oil in a non-stick frying pan after cutting it in half inch pieces and coating it with corn meal. She probably fried okra in lard in an iron skillet.

No matter - it was good!

Ask around , see if people know what orka is.  Shoot, do you know what okra is? Other than apparently an odd, obscure vegetable...
vegetable gardening