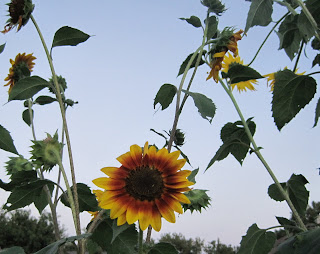 This past week we got to experience something that hasn’t happened around here in years. Years, I tell you.

At least that’s what the newspaper reported each day and what I wrote down in my big ol’ garden journal. And then for each day I wrote my general observation for the day – Hot. Or Hot! Or Hot!!

With temperatures like those, you can bet I didn’t spend much time in the garden this past week. Mostly I ran out to water plants in containers and then ran back inside where it is cool and air-conditioned.

And to think I grew up without central A/C in the house!

By Sunday, I couldn’t stand it anymore, so I went out to work in the vegetable garden. I worked until I got hot, then I’d come in to cool down and look at a few bloom day posts.  Then I’d go back out to garden some more.

That heat could sure make a gardener hallucinate or something, if they aren't careful like I was.

And that heat brings out the mischief in the garden fairies, too. You’d think they would stay in the shade, sleeping off whatever mischief they got into the night before. But enough things happened in the garden yesterday that I’m sure they were out in full force in the heat.

First off, a wee little fairy named Rye Raker Mahoenee kept following me around in the garden. Of course I never actually saw him, but I knew he was behind me, just the same. Every time I set my new Cape Cod weeder down right beside me, he’d take it and hide it. I’d reach for it and it would be gone and I’d have to hunt for it. He was sure clever in where he hid it, too. I’m sure he thought he was being funny, but he was really wasting a lot of my time trying to find that weeder.

Then another garden fairy, little Miss SweetPea Morningdew, who is usually such a do-gooder, kept adding weeds where I knew I had just weeded. She made it seem like I’d never get done weeding, but finally, I think I got ahead of her, at least through half of the garden. I still need to go out and weed the other half of the garden later.

Oh, and you should have heard the ruckus made by ol’Acer Duckdown when I dumped a big load of weeds in the compost bin. Garden fairies really should have more sense than to chose the compost bin as the place to sleep off their night revelry, but he did and he got a face full of weeds as a result. Serves him right. He was probably out partying with another garden fairy named Bulgar Webspinner, also known as Bulgar the Vulgar. Don’t ask me about him!

Anyway, that’s pretty much it for the vegetable garden. The garden fairies had made a mess of it, but I managed to salvage harvest some tomatoes, squash, and okra yesterday anyway, and got things set right again so I can start sowing some seeds for a few fall crops.

Whew, gardening in the heat is sure not for sissies! If you aren’t careful, you could start imagining all kinds of things going on in a garden.

Good thing the temperatures are supposed to be cooler this week, only in the 80’s.