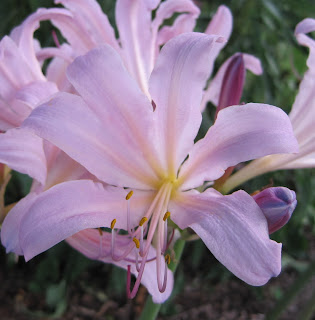 Insects, as it turned out, were not as scary and creepy as I thought they’d be. They were really rather fascinating.

But in those two classes, no one ever mentioned the word “frass”. I would have remembered such a word. "Frass". I had to wait some 30 years or so later to find out about frass on another blog, Going Green Mama. Ever since then I’ve been like a five year old who just learned a new word.

You know what frass is, don’t you? It’s a fancy word for insect poop!

“With all those cicadas in the trees, you should really wear a hat to avoid their frass dropping on your head.”

“What is all the frass doing around the tomato plants? Hornworms, again!?”

“Oh frass! I forgot to stop at the garden center.”

“Does anyone have a picture of frass that I can post on my blog?”

“Has anyone ever studied frass to find out if it is like manure and provides nutrients for plants?”

Really, frass is sort of like a gardener’s secret cuss word.

For example, let’s say you step down on your foot real hard after it falls asleep and you end up twisting your ankle.  You can yell out, “Frass!” and no one will know you’ve just cussed.

Or when the neighbor kids are playing nearby and your garden hose kinks up on you again, you can freely say, “This hose is a real piece of frass!” Then the kids’ parents won’t get all mad because you taught their kids a cuss word, even though in a way, you did.

A gardener’s secret cuss word… this is one of the best new words I’ve learned in a long time.

Try it out for yourself. Let me know if you like it or if you think it is a bunch of frass.
humor insects