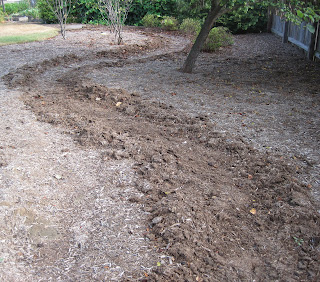 Garden designs, as it turns out, often take a break in the summer time, or at least mine is.

That was a month ago, and from then until now, we've had very little rain and it has been very very hot, so mulling has been difficult.

One would think mulling would be easy to do with no rain, but it has also been too hot to do much outside, which is the best place to be to mull over a garden design.

Anyway, I vow to commence mulling now and send some feedback to the garden designer soon so that we'll be ready for fall planting, if it starts to rain again.

I did get a notion one hot evening to work out the path through the "woodland garden" and make some changes suggested by the garden designer on where the path should start. Then I decided that I should use some edging blocks previously removed from the old garden beds to line the path until I figured out what I really want to use for the path. 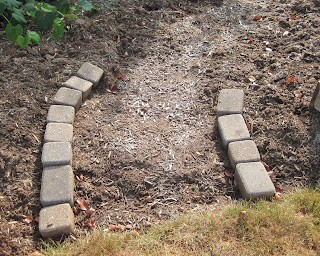 I thought it looked hideous, and kept thinking about how there is nothing more permanent than a temporary solution, so I stopped before this became my solution for the path. I'm shocked I'm even showing it to anyone. Don't judge, it has been so very very hot and dry!

Out in the front garden, four of five Chamaecyparis pisifera 'Sungold' died. This was before the drought of August 2010 descended on my garden, so I don't think it was due to lack of water. I wonder if it was due to too much water because June was the third rainiest June in Indianapolis since they started to keep records.

Speaking of records, I wouldn't be surprised if August turned out to be the driest August in Indianapolis history making this a very conflicted summer in the garden.

Anyway, I pulled out the four dead Chamaecyparis and could see no signs of any root growth on any of them. They popped right out as though they had been planted just a few minutes before. Odd.

I sent a note to the garden designer to let her know. I also told her that I had a trial plant, Juniperus chinensis 'Etzogam', that I had gotten in Cincinnati at the regional Garden Writers Association meeting and was very intrigued with the gold coloring. 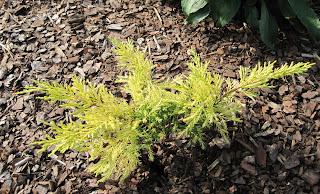 Being a new introduction, it might be hard to find five good sized plants, which is how many I would need. But I'm tempted to hold out until I can find these because did you see that gold coloring?

I know! I don't need to be reminded that I swore I would not plant any junipers in my garden. But I would if I could find these to plant.

There is still some hardscape to install for the garden design, other than the path through the woodland garden.

I need to find a fountain for the patio. The lovely, lovely patio that I love more every day. 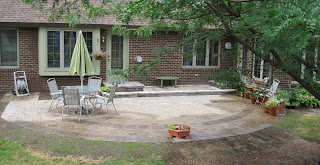 Which also needs way better furniture than what I have now.

I also need a gate for the entrance to the vegetable garden. Mary Ann from Gardens of the Wild Wild West sent me a link to a gate featured on the Fine Gardening website that is made with some garden tools. It is pretty close to what I want, though I would like more "hoe" in mine. I'm currently waiting for some proposals based on sending the garden designer and the hort-enabler the link to the picture of the garden gate and asking for something like that but with a bit more hoe in it.

While I am waiting, it is time to get back to start mulling over those ideas and plant lists the garden designer sent me so I can send some feedback.
garden design