May All Your Weeds Be Wildflowers 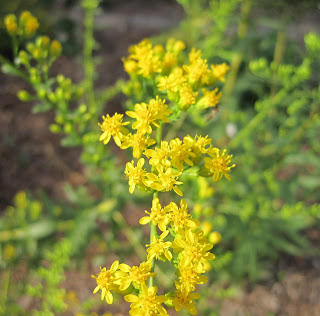 “May all your weeds be wildflowers” is a charming sentiment.

I hope this is true in my garden. I hope that the weeds that grow and bloom there are pretty enough for someone to say “how lovely” instead of “doesn’t she ever weed”.

There are blooms in my garden, such as the rare Short’s goldenrod, Solidago shortii, that someone might wonder about, if they hadn’t been brought up to speed on the beauty of this flower in the late summer garden.

When I see goldenrod blooming, for that manner, when I see any native wildflowers blooming, I think of the book The Brother Gardeners: Botany, Empire and the Birth of an Obsession by Andrea Wulf.

Wulf tells the stories of gardeners and botanists who shipped plants from the New World back to England where eager gardeners and botanists could hardly wait to get their hands on these strange, new plants that they had never seen before. It’s a good book, based on the lives of John Bartram, Carl Linneaus and others who shaped gardening not only in England but also in the United States.

Back then, in the eighteenth century, they most certainly did not view goldenrod as some common roadside weed. There were no roadsides. Nor did they likely mistake it for the cause of the hay fever that overcomes so many people in the fall. Blame ragweed for that. Instead, maybe they saw a beautiful spray of tiny gold flowers, attracting numerous insects and practically sparkling in the sun.

I’ve heard that many British gardeners love goldenrod and I’ve heard rumors that it is gaining in popularity here in the United States as a cultivated garden plant.

Perhaps a touch of goldenrod is growing in your garden now, as it is in mine, all sparkly and gold and fresh looking amongst flowers and plants that have seen better days and better summers. If it is, whether as a weed or as something you planted on purpose, I hope you are enjoying it.

And on this Wildflower Wednesday, hosted once a month by Gail at Clay and Limestone…

May all your weeds be wildflowers, or at least blend in nicely with the rest of your garden.
perennials