August 19, 2010
There was much excitement here at May Dreams Gardens when others became aware that I was going to join in for Three for Thursday hosted by Cindy at My Corner of Katy.

Excitement might not be the right word for it, though. It was more like bickering and arguing.

The garden fairies found out about this post topic and thought they should write the post because they haven’t posted in awhile. They said they had three important pieces of advice for gardeners, having to do with misplaced tools, weeding, and emptying weeds into the compost bin and it would be perfect for Three for Thursday.

I said that sounded like it was going to be too much like the letter I just wrote and posted on Monday .

Then Hortense Hoelove showed up and insisted that she be the one to do the post because most of the time when she writes posts to answer readers’ questions, she posts three letters. She declared rather loudly to the garden fairies and anyone else within a block or two that she would handle the post for Three for Thursday, thank you very much case closed.

I said no, because normally her day is Fridays, that is if she even bothers to post at all. And since she hadn’t posted much lately, I didn’t think she deserved to post on a Thursday. Not to mention, it would upset the order of things around here.

As if that wasn’t enough, the President of the The Society for the Propagation of Old Time Gardening Wisdom, Lore and Superstition (SPOTGWLS aka The Society) declared that she had minutes from a recent meeting that just had to be posted as soon as possible regardless of any special theme to the post.

I told her I didn’t believe her because as far as I knew the last meeting was clear back in June… wait, I am the President of The Society. Does it make sense for me to argue with myself?

I’ll have to discuss that with Dr. Hortfreud.

Anyway, to keep the peace here at May Dreams Gardens, I finally decided that for Three for Thursday, we would compromise. The garden faries, Hortense Hoelove, and I would each post one picture with brief commentary.

Here is the picture I’ve chosen to post for Three for Thursday. It is the one picture that answers one of the most important questions that a gardener can ask. 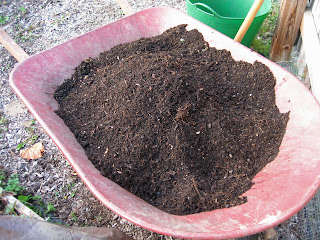 P.S. I hope to get back to posting more regularly on Fridays, please send questions.

From the Garden Faries…

Do you know why we call Bulgar Webspinner "Bulgar the Vulgar"?

Because he claims to be responsible for this! 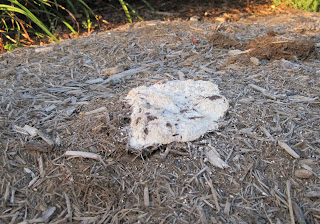 It’s commonly called dog vomit slime mold. It won’t hurt you but it sure looks gross. Bulgar claims he is responsible for this grossness, so that’s why we call him Bulgar the Vulgar!

From The President of The Society….

Dear Members of The Society for the Propagation of Old Time Gardening Lore, Wisdom and Superstition (SPOTGWLS aka The Society),

I’ve been forced to limit my words in these minutes, so will dispense with all the usual society business to share a picture which will be part of a program on my garden design thatI hope to present soon. I really wanted to show three pictures, but there isn't space or time for that today. 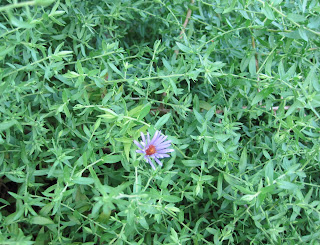 These asters are going to look wonderful when in full bloom, hopefully with all kinds of bees and butterflies tending to each and every flower. What a great way to welcome fall in a few weeks!

I promise, we won't wait too long before having another meeting, one without all these constraints!

Sincerely,
Carol,
President for Life, SPOTGWLS aka The Society.

And that’s Three for Thursday from May Dreams Gardens!
fairies hortense hoelove society

Dee @ Red Dirt Ramblings said…
I was wondering when I'd see an aster bloom. Mine are still prepping. If those garden fairies don't quit talking about gross stuff, I'm not going to read them.
Thu Aug 19, 11:52:00 AM 2010

Cindy, MCOK said…
Dang, I was hoping the fairies might have an answer for me re my missing Felcos. Instead I learn that I should be calling it Bulgur Barf fungus!

Mr. McGregor's Daughter said…
I have several of those ex-Asters. They looked so cute the first year, now, in the second year, they are huge and look bent on garden domination. I'm sure your garden designer has taken that into account and has probaby determined that you really don't want to see all that much of your neighbors.
Thu Aug 19, 12:25:00 PM 2010

Anonymous said…
Very cute post. I am still trying to figure out what Three for Thursday really is about and honestly, Carol, you did not help me out much. Still confused, but a few more three's might do it.
Thu Aug 19, 11:38:00 PM 2010

Frances said…
Dear Carol and friends, very informative on two fronts, but what is referred to here as cat vomit fungus on the mulch, you could just as well left that out! Yecchhhh! October Skies is absolutely amazing, if a bit floppy. The bloom period is very long, the color truly inspirational and it goes so well with the sheffie mums. It will be absolutely fabulous! :-)
Frances
Fri Aug 20, 06:57:00 AM 2010

Rose said…
I've never seen dog vomit slime mold before, although I probably have the real thing somewhere in my yard:) Pretty gross! Considering all the clippings and enormous cucumbers I've been adding to my compost pile this summer, I hope to have more of that black gold next summer, too.