Down there is yet another garden design element that I want to find in my garden.

This particular grate at the Dallas Arboretum most likely functions as a place for water to run off the path into an underground network of pipes that take the water off to a nearby lake.

Or perhaps it is where garden fairies go to hide on hot summer days when the arboretum is full of visitors. What comes up through that grate as the last light of day fades into night? Is it a portal to another world, a world that exists in every garden but is not often spoken of?

Whatever purpose it serves, it adds a bit of mystery to the garden, a bit of horttery, if you will allow the use of another word not found in any dictionaries, at least for now.

This well in a private Dallas garden also has a bit of horttery to it. 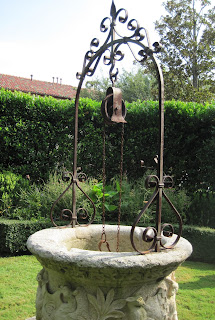 When I saw it, I had to walk up to it to find out who deep it was. I couldn't resist. Hello, helloooo, helloooo down there.

I won’t reveal its secrets or how deep it was!

Deep inside this Dallas garden designed by Rosa Finsely, the garden fairies have quite brazenly built themselves a castle. 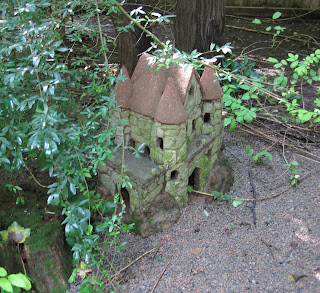 What does it look like inside that dwelling? Had I not been in this garden with one hundred or so other gardeners touring it during the Garden Writers Association Symposium in Dallas, Texas, I might have knelt down and peered inside the windows to see inside. But I didn’t, so it will remain yet another horttery, never to be solved.

In fact, a good horttery shouldn’t be solved. It is much more enjoyable to develop theories about it, changing the explanation depending on who is in the garden, what the season is or what other events have occurred that might, or might not provide important clues.

But I'll make no mystery of this... mystery in a garden – horttery, is another design element I want to include in my garden.
fairies garden design humor