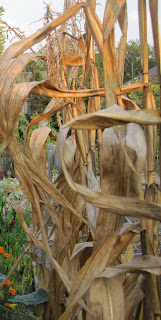 Every garden has its own song.

In my garden, the corn stalks long ago dried up but I like to leave them standing so I can listen to the rustling sound they make when the wind blows one stalk against the other.

Elsewhere in the garden, I can hear the birds calling out to one another – cardinals, robins, goldfinches and all kinds of other birds that I don’t know all that well. They often start their singing early before the sunrise. You would think that some mornings, it is their loud singing that causes the sun to rise.

In the late summer evenings, I listen to the whirr of the cicadas in the trees and the chirping of the crickets, hiding out wherever it is they like to hide. They are joined throughout the day by the buzzing of bees, moving from one flower to another.

A small fountain in front adds to the garden song with the soothing, cooling sound of water.

Sometimes, after a heavy snowfall, the garden rests in silence, the snow muffling the sounds of any creatures brave enough to stir in the cold. Those days remind us of how empty and cold a garden can seem when there is no sound. It is quite eerie.

When I read about adding sound to a garden, I mostly find information about adding the sound of water to the garden, or see ads for music speakers that are disguised as rocks. I’m happy to add the sound of water because that would draw more song birds to the garden. But I’ll skip the music speakers, and I probably won’t add any wind chimes, either.

I’ll just add a diversity of plants and bring the garden design element of garden song to my garden that way.
garden design