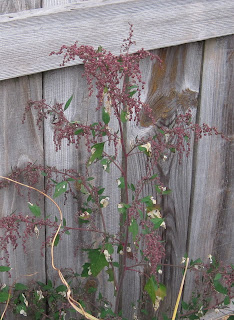 Back behind the compost bins, I discovered fall color in the seed heads of Chenopodium album.

I am a lazy gardener for not pulling out these plants months ago before they even got close to setting seed. After all, this is the very common weed, lamb's quarters.

I'd better hurry and pull them out now, though, before someone accuses me of being a softy when it comes to weeds in the garden.

I'll get to them tonight, or maybe tomorrow for sure. We'll see.

In the meantime, it is possible that any number of critters, including chipmunks, squirrels, meadow voles and birds, all of which I have seen in and around the garden, will have a chance to eat these seeds.

Then they'll do the seeds a favor by passing them through their digestive systems and out onto the ground where the seeds can germinate next spring and become new weeds for me to pull.

It's a vicious cycle.

In some areas of the world, gardeners and farmers grow lamb's quarters on purpose and eat the young leaves. You can actually buy seeds for Chenopodium album to plant in your vegetable garden!  No doubt the seeds are for varieties that are improvements over the basic weed.

Apparently, the young leaves can be used like young spinach leaves. But I am taking the same stance on this weed as I do on that fat, greasy weed, purlsane. I don't plan to eat either one any time soon. Someone else can try lamb's quarters and tell me how it tastes.

And another interesting tidbit about Chenopodium album. This weed isn't even a native plant here in North America. That's a bit surprising, given how common it is, but plants have their ways, and they do manage to get around the globe by various means, including sometimes tricking people into transporting them.

Who knows, maybe early immigrants brought seeds for lamb's quarters with them from the far flung corners of the words because...