Lessons from the Rose: This is Not the Time to Fade Out 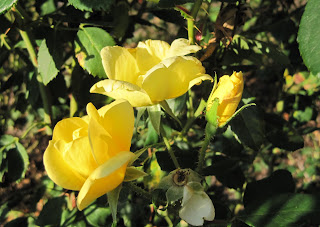 What do roses know? About the weather? About the change of seasons? Probably more than we know!

These yellow Knockout Roses®, Rosa 'Radsunny' are blooming as though it is still high summer. But we've had some heavy frost already and by the end of the week, there will be a hard freeze or two.

Perhaps these roses know this but instead of just fading away, they've decided to bloom as much as possible, to not give in until they are iced over, snowed under... Brrrr... I don't want to think about it.

We can learn from the roses as we wind up this gardening season. 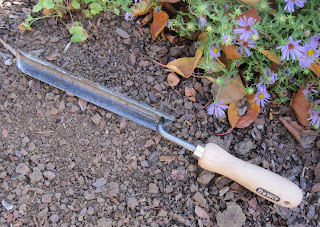 Now is not the time to fade out. There are bulbs to plant.

I was planting bulbs today and remembered that I had this trowel, a rockery trowel. It's good for digging in tight spaces with a fairly sharp blade. I don't have a rock garden, but I bought this tool because it was a fun looking trowel.

I used it to plant smaller bulbs, and it worked quite well for that purpose. I pushed the trowel into the ground, pulled out a plug of dirt, dropped in the bulb and then covered it up. All without disturbing the other plants in the area.

I also discovered that it was easier to plant bulbs where I had been watering all summer. Where I haven't been watering, the ground is rock solid. As always, I am watering the bulbs after I plant them. 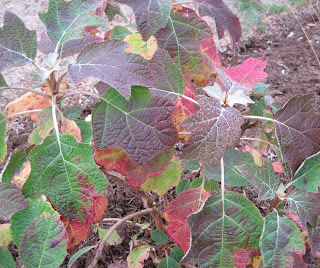 Now is not the time to fade out. There is still time to plant trees and shrubs.

The fall color on these hydrangeas is stunning.

The advantage of planting trees and shrubs in the fall is that their energy is spent on root growth, not on top growth and blooming. By the time summer arrives, the fall planted plants will be fairly well established and better able to survive hot, dry summer conditions.

Fall planting has more to do with soil temperature than air temperature, so even if we think it is cold outside, conditions may still be good for the plants. Root growth takes place in soils as cold as 45F (roughly, thereabouts, depending on which source you consult).

Unfortunately, fall planting also has a lot to do with finding good plants still in the garden centers. Not as many people think about doing much in the garden in fall, except for leaf raking, so selections in some garden centers can be rather limited. After all, the garden center owners don't want to get a bunch of new trees and shrubs in for fall and get stuck with over-wintering them.

That's too bad because fall is not the time to fade out in the garden.

It's the time to get going, to plant bulbs, trees, and shrubs, to prepare new planting beds for spring.

Learn from the rose...keep going strong right up until the very end.