Achieving Happiness In Your Garden: The Sixth Secret 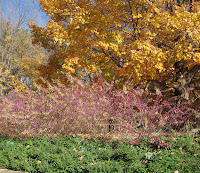 I'll admit I was excited when I learned that there were several more secrets to achieving happiness in your garden other than first five secrets I had discovered so long ago. I was on high alert. I wanted to find these new secrets, wherever they were and whatever they were, as fast I could grow radishes in the springtime.

Every day as I tended the garden, I looked for stray scraps of paper that might have a secret written on them. I turned over rocks to see if a secret might be hidden beneath one of them. I searched for ribbons sticking out from who knows where that when pulled might be connected to a tiny, hidden package containing a secret.

But any bits of paper turned out to be trash, the loose rocks were merely hiding pill bugs, and there were no stray ribbons that I could find, except for one that seemed to be woven expertly into a robin’s nest.

I despaired of ever finding that next secret.

Then one day I put on an old pair of gardening gloves, a pair I had worn often and nearly worn out, and the palm of my hand started to itch. At first I thought maybe a spider had taken up residence inside the glove and had bitten me when I put it on. But when I yanked off the glove, there was no spider. Inside the glove, though, there was a tag that I had never noticed or felt before. I could just barely make out some very faded words on it.

“Could this be the sixth secret to achieving happiness in the garden,” I asked myself?

And indeed it could be, and it was. With tiny, funny little handwriting, the kind you might expect garden fairies to have, someone had written, “The sixth secret to achieving happiness in your garden is to plan your garden”.

It made perfect sense.

A garden without a plan is like a big, unorganized crowd, milling about, making a lot of noise, wondering what to do, who’s in charge, where they should go. Time is wasted; effort is wasted! It looks like a mess, and it is a mess. No one in the crowd is all that happy and no one wants to go near the crowd for fear of being sucked in.

In a garden without a plan, the plants are just planted willy-nilly wherever there happens to be a bare spot of dirt, and the results are chaotic. The plants are wasted, and time and effort are wasted trying to plant more plants amidst all the other mis-placed plants. The unplanned garden looks like a mess, and it probably is a mess. No one is happy in this kind of garden, including the gardener.

But with a plan, you bring a bit of order to the garden. You figure out in advance which plants go where, where focal points should be, and generally how you want the garden to look and feel. With that figured out, you are less likely to waste time and money with the wrong plants or with the right plants in the wrong places.

You can garden more confidently with a good plan, knowing that the end result will not be a mess, but a garden.

A garden plan doesn’t have to be elaborate or expensive. Some gardeners can come up with their own plans, a general framework for their garden, and end up with very pleasing gardens. The plan can be as simple as, “we’ll put the vegetable garden here in the sun, a long perennial border over there, and plant a shade garden near the pine grove".

Other gardeners may prefer to work with a garden designer or landscape architect to develop more detailed plans to follow when planting.

How simply those three words sounded to me, and how true I knew them to be. After memorizing the message, I went around to the old garden shed and carefully laid that pair of garden gloves next to the book containing the first five secrets to achieving happiness in your garden.

Once I had discovered all five new gardening secrets, I planned to write them in the book so all the secrets would be in one place and available to any gardener who sought them out.

Knowing the sixth secret, I could now begin the search for the seventh secret.
garden design Secrets