Achieving Happiness in Your Garden: The Seventh Secret 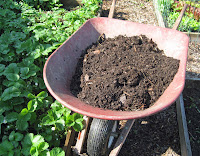 Earlier this summer, my sister called to tell me that they while cleaning out the attic, they found an old box labeled “gardening stuff”.

“Would you like to come over and take a peak inside to see if there is anything in there that you want?”

She barely had a chance to finish asking me before I jumped into my car and headed to her house, the very house we all had grown up in. “What could be in that box”, I wondered? I thought we had cleared out the attic years ago, before my sister and her family took over the house. How could there still be a box left in the attic labeled “gardening stuff”, that we hadn’t already found?

What was in that box?

Soon enough, I would find out. I pulled up to the house, jumped out of the car and met my sister on the driveway. She pointed to a pile of junk from the attic which included the small, cardboard box with “gardening stuff” scrawled on the side. "There it is", she said.

She hadn’t even opened it yet.

Feeling a bit like Geraldo Riviera without the television crew, I ripped the tape off the top of the box, and slowly opened the flaps to reveal its contents. Inside, buried in a nest of old, yellowed newspapers was an ancient looking green, metal canister of Ra-pid-Gro fertilizer.

A little disappointed, I picked up the canister. It was then that I noticed that someone had scratched a big "X" through the words “Ra-pid-Gro” and below it had scrawled a message. I could barely make it out.

“The seventh secret to achieving happiness in your garden is to feed the soil.”

Feed the soil, and then the soil will feed your plants.

This is why happy gardeners make compost and covet their farm neighbor’s composted manures, why they don’t put their leaves out at the curb in the fall, why they leave grass clippings on their lawns. They know this is what feeds the soil, which in turn feeds the plants.

In the past, it was a common, popular, and accepted practice to mix a little Ra-pid-Gro or other liquid fertilizer in some water and douse the plants with it on a regular basis. The plants responded, too, by perking right up as though someone had given them a shot of caffeine. But without good soil, and the healthy mix of nutrients that the soil provided for the plants, the plants didn’t last long without needing yet another shot of Ra-pid-Gro. They were soon addicted to the stuff.

But plants grown in good soil don’t need a shot of Ra-pid-Gro to grow well. The healthy, well-fed soil provides all the nutrients that most plants need.

I knew this to be true, and was pleased to learn it was one of the secrets to achieving happiness in the garden.

I thanked my sister for thinking of me when she found that box labeled “gardening stuff” and took the canister home with me. Once I was back in my own garden, I placed the canister on a shelf in the old garden shed as a reminder of the seventh secret....

Then I began to wonder again. What would the eighth secret be and when and where would I find it?
Secrets soil