Achieving Happiness In Your Garden: The Ninth Secret 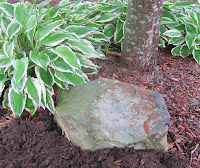 Wouldn’t you know it! I was digging a hole to plant a new shrub when I hit a big ol’ rock. I not only heard that clank and “thud” when the shovel hit the rock, but felt the shovel vibrate at the same time.

I spent the next hour or so trying to dig the rock out, wondering all the while why I didn’t just plant the shrub a foot over to avoid the rock. But that rock was taking up the perfect spot for that shrub and I was determined.

After realizing it wasn’t going to be that easy to dig the rock out, I went to the garage to get a crow bar to pry it out. Then I remembered that I didn’t own a crow bar. I briefly surveyed the wall where all the hoes were hung and wondered if one of those hoes was strong enough to use instead of a crow bar. What was I thinking? I would never abuse a hoe like that.

Instead, I hopped in my car, drove down to the hardware store, and bought a crowbar.

By the time I got home, it was nearly dark, so I gave up on the rock for the day. But first thing that next morning, I headed out with my new crow bar.

After another hour or so, I managed to move the rock all of five inches, but that was just enough to notice a little metal box buried under the edge of the rock. While carefully holding the rock up with the crow bar, I kicked the box out from under the rock with such force that the box opened up to reveal yet another folded up piece of paper inside.

With hands shaking, I carefully unfolded the paper and read what someone had so carefully written on it.

“The ninth secret to achieving happiness in the garden is to ask for help.”

Of course, ask for help!

Many a gardener derives some satisfaction in doing all the gardening in their gardens by themselves. They never ask anyone for assistance. They are proud of the fact that no one else has ever planted anything in their garden except for them.

But doing it all alone can be so limiting.

Have you ever passed up a shrub at the nursery because it was in a bigger container than you thought you could manage? Ask for help. Many nurseries will not only deliver the plant, they’ll plant it, too, for a modest fee.

Have you ever looked at your garden and wondered if there were better plants out there? Ask for help. Ask other gardeners to suggest different plants, to help you expand your planting palette.

Have you ever wandered around your garden and felt like it wasn’t quite right, that it could flow better? Ask for help. Hire a garden designer to help with a design. Or invite other gardeners to come and make suggestions for changes.

Have you ever stood in the middle of your garden and not known what to do next? When should you prune? When should you plant? What are the names of some of these plants? Ask for help. Pay a garden coach to spend a few hours helping you sort out a good “to do” list for your garden or hook up with other gardeners who can help you out.

Have you ever just had some work to do in the garden, like removing a big rock, that you just weren’t strong enough to do alone? Ask for help. There are people who are stronger than you who could do twice the work in half the time.

Asking for help isn’t a sign of weakness and it doesn’t mean you give up control of your garden.  Asking for help is a sign that you understand that your garden shouldn’t be limited by your personal strength, your ability to do design, your knowledge of plants or your understanding of plant care.

And asking for help doesn't mean always having to pay for help.  You can offer to help others and in turn, they will help you.

Like many of the other secrets to achieving happiness in your garden, this one seemed to make so much sense.

As usual, after reading the secret, I took it to the old garden shed and left it on the potting bench next to the other secrets.  I most definitely wanted to share my secrets with anyone who asked about them

As I quietly left the shed, I remembered that there were five new secrets and I had now found only four of them. I couldn't help but wonder, "What was that last secret and where would I find it?
Secrets

Unknown said…
Nice post, and yes, ask for help. We all need some for our garden.

Janet/Plantaliscious said…
Mmm, I think that may be one of the hardest to learn! I've no problem asking for help on plants, whether it is choosing good ones, arranging them well, or what to do with them. But I am hideously independent when it comes to the physical stuff. I am slowly learning that often people like to help, it makes them feel good to be useful, and I am more use when I am not cranky and sore from doing too much... A good reminder!
Sat Nov 13, 04:18:00 AM 2010

mr_subjunctive said…
Many nurseries will not only deliver the plant, they’ll plant it, too, for a modest fee.

In my experience, it's more of a shameless, wanton fee, but it's true that a lot of people don't consider asking about delivery and installation.
Sat Nov 13, 09:26:00 AM 2010

mss @ Zanthan Gardens (Texas) said…
This is a difficult one. Gardens are such personal things that having someone else meddling with it can feel like an intrusion. It's hard for some of us to admit that we can't do it all--even if we know we're frustrated and unhappy.

In Austin, a group of us get together regularly to brainstorm garden design solutions for each other. The host garden supplies refreshments and everyone ends up bringing plants and seeds to swap.

Seeing our gardens with fresh eyes and fresh ideas is a wonderful experience. Sometimes we have to look outward for inspiration and help.
Sat Nov 13, 10:47:00 AM 2010

lifeshighway said…
I do wish I could find life's greatest secrets hiding about my garden. I love's today post. We never ask enough for enough help or advice. I am as guilty of this as any others. I have so much to learn and need to learn to step forward and ask for help.
Sat Nov 13, 12:41:00 PM 2010

Susan from NC said…
My aching back knows too well about not asking for help but even I had to when it came to moving a rock that weighed some 700 pounds out of a prime vegetable bed spot. Come-alongs are a great help too!
Sat Nov 13, 05:45:00 PM 2010

Unknown said…
So very true...and I always find it challenging to ask for help, because I think I should be able to "do it all"!! A few friends and I were talking about forming a gardening group, where we work together in each others' yards while the kids play together--the kids would be entertained and happy, plus we'd accomplish so much together. Sadly, we haven't begun this group...but it sure seems like a great idea!
Sat Nov 13, 09:29:00 PM 2010

Cindy, MCOK said…
When I wanted to remove a large patch of lawn for a new garden bed, I advertised "free sod, you dig it" on Craigslist. I saved myself the time and effort and the guys who did the work were delighted to have the sod.
Sat Nov 13, 10:42:00 PM 2010

Toni - Signature Gardens said…
Oh, how I wish I didn't have to learn this secret the hard way. My pride wouldn't let me ask for help because I think I can do it ALL, I think I can do it BEST, afraid to give up the control. Sometimes I think if I don't do EVERYTHING in my garden, then I'm not a "real gardener." Seems so silly as I sit here with a gimpy arm from overdoing it. If I had asked for help I would still be enjoying working in my garden now. Instead, I have had to spend months and months trying to recuperate and now the possibility of surgery looms. People pay me to help them design their gardens and pick out just the right plants. I love to be of help; I just have such a hard time asking for help. Gardeners take note: Heed this very wise advice!! Thank you, Carol!
Sun Nov 14, 11:20:00 PM 2010