Achieving Happiness In Your Garden: The Tenth Secet 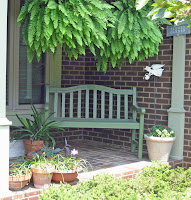 Once upon a time, I was sitting on a bench on my porch, thinking about the various flowers and vegetables and trees and shrubs that I had planted over the years when suddenly a bunny came up to me and began to speak.

“Carol, what do you think of your garden?”

I was speechless. I couldn’t believe what I had just heard. Rabbits don’t talk!

But the rabbit, unfazed, followed up with an answer to his own question.

“I think you think it is nice enough, but there are parts you would like to change.”

Still speechless, I barely managed to nod my head in agreement.

“You should take heed of the tenth secret for achieving happiness in your garden.”

Then he hopped off and disappeared beneath a large shrub.

Just then I looked down and realized that the rabbit had left a tiny envelope labeled “The Tenth Secret”. I opened it like it was announcement of an Academy Award and read the message inside.

Of course. As with the other secrets I had found, it was deceptively simple but made perfect sense.

If you don’t like your garden as it is, change it.

Are the flower borders too narrow? Change them by making them wider.

Is there a sickly tree marring the view from your favorite window? Change the view by cutting down the tree.

Are there flowers in the garden that you just don’t like? Maybe they were planted by a previous gardener, or maybe you keep seeing flowers at the garden center that you like better than those you have. Change out the flowers by digging up what you don’t like to pass on to another gardener who will love them.

Do you have nice plants but just don't like where they are planted? If they aren't too big, change their locations by (gasp) digging them up and moving them someplace else.

Life and the seasons are too short to keep tending your garden the same way year after year if you aren’t happy with how it is. Change your garden if you don’t like it.

My mind raced. I felt almost dizzy with excitement. That rabbit was right. I did want to change my garden, and I wanted to get started right away.

But first I put that tenth secret back in the envelope, knowing it would be difficult at times to follow, but that it, like all of the secrets, would help me achieve happiness in my garden. Then I carefully placed it in the old garden shed beside the book of the first five secrets I had discovered so long ago.

Change your garden if you don’t like it.
Secrets