Five More Secrets To Achieving Happiness In Your Garden 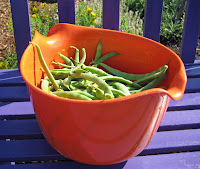 I have discovered five more secrets to achieving happiness in your garden.

One evening earlier this fall, I was sitting in the quiet of the garden lazily looking at nothing in particular when I noticed an odd plant tag sticking up out of the ground.

It wasn’t anywhere near a plant.

Had I planted something there that had disappeared? Was there a dormant root, a seed perhaps, buried near that plant tag?

Curious, I knelt down by the tag and read it slowly.

“There are five more secrets to achieving happiness in your garden.”

I was startled! I thought there were only five secrets to achieving happiness in your garden and I had already discovered them all several years ago. To learn there were five more secrets…

Well, truth be told, it didn’t happen quite that way.

One day this past summer, I was picking green beans in the garden, tossing them into my big orange bowl that I always use when I pick green beans. Suddenly, I was startled by a little baby bunny resting in between the rows of green bean plants.

I nearly touched the bunny before I saw it, because it didn’t dart off as most rabbits do when I get near them.

Instead it sat there calmly, looked right at me, and then slowly got up and hopped away. When I looked down to where it had been sitting, I saw a slip of paper, about the size of a seed packet.

In fact, I thought it was a seed packet until I picked it up and read, “There are five more secrets to achieving happiness in your garden.”

Truth be told, that's not exactly what happened, either.

Let's just say that I once thought there were just five secrets to achieving happiness in your garden. Then I learned there were five more secrets.

Fortunately, once I realized that there were these five additional secrets, I discovered all of them in a short period of time this past growing season.

And they are, in no particular order…

To be revealed as I discovered them, one at a time.

(You really didn't think I was going to list all five secrets at once, did you?)
Secrets