Fragrant Sumac Redeems Itself In My Garden 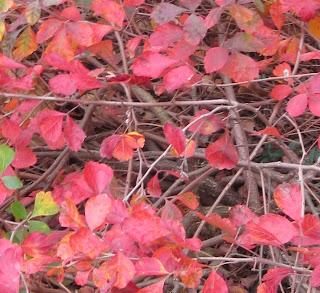 I sometimes wonder if the neighbors think I’m growing poison ivy on the side of my house. “Leaves of three, let it be.”

This is Rhus aromatica ‘Gro-low’, Fragrant Sumac. It has leaves of three that turn this lovely red color in the fall, just like poison ivy.

But it isn’t poison ivy, it is Fragrant Sumac, and this particular variety only grows about two feet tall, but spreads nicely. I used to be ambivalent about it. I bought it because I wanted a nice plant in the spot where it is, that wouldn’t get too tall, and this is what the garden center had.

The garden designer would like me to move it to another spot, where she thinks I will like it better. At first, I didn’t want to because this is far from a favorite plant of mine.

But then it turned all pretty and red this fall, so I’m going to move it after all, to the other side of the house.

Fragrant Sumac is a member of the Cashew family, Anacardiaceae, along with cashews, pistachios (which I love), and poison ivy, Toxicodendron radicans, which used to be called Rhus radicans, until it got kicked out of the Rhus genus for bad behavior.

Another good thing about Fragrant Sumac is it is a native plant. I know the birds like it to hide in and amongst those branches. The birds might also like to eat the fruit of the fragrant sumac, which is technically called a drupe, but I’ve never seen fruit on the one I have. This is probably because R. aromatica is dioecious, with female and male flowers on separate plants. I suspect this one is a female. In fact, I wonder if all of the ‘Gro-low’ Fragrant Sumacs are females. If asexually propagated, I would assume that to be the case.

But even with insignificant looking flowers and no fruit, it is still worth keeping around for that fall foliage.
shrubs