Wildflower Wednesday - Where There Are Flowers, There Are Insects 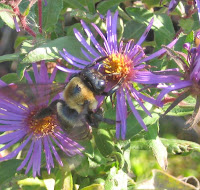 When I was studying horticulture in college, I was required to take a class in entomology.

It was a course I dreaded but the university decreed that I must learn about insects.

The professors who taught the course decreed that I must also have an insect collection to pass the class. However, they were sensitive to the seasons and only required you to collect 15 insects if you took the class in the spring semester, versus 40 insects in the fall semester.

But I was a bit of a fool because, as it turns out, there are fewer insects running around in the winter and early spring and so I was forced to collect some rather nasty looking insects that had made their way indoors for the winter, namely cockroaches and beetles.

But I digress with fond memories of my insect collection.

What I really discovered in that entomology class was that insects are fascinating, interesting, and not all bad. One of my classmates and I actually made up the acronym, E4I - Enthusiasm for Insects, because we were really surprised at how much fun we were having studying insects.

I enjoyed that class so much that I actually took a second entomology class as an elective -- "Insect Pests of Ornamental Plants" or something like that. It was a fun class, too, but I wish I had taken a class that I would call "Where There Are Flowers, There Are Insects".

It would be all about insects and their relationships with plants. We'd cover pollinators of all sorts and discuss how the flowers and insects help each other out. We'd talk about how insects can make themselves looks like parts of the plant to ward off other predatory insects. We'd go on field trips to observe the insects. It would be a popular course and no insect collection would be required.

Earlier this month, I got a brief glimpse of what fun a class like that would be when I heard Jim McCormac, author of Wild Ohio: The Best of Our Natural Heritage

speak about "Bugs & Blooms: Their Intricate Relationships" at the INPAWS conference.

If you ever get a chance to hear Jim speak... go and do so. I'm confident no matter what he is speaking about, he'll sneak in a few pictures of insects on flowers and plants. Or check out his blog for info on some of his interesting discoveries and stories of plants and insects.

And so what is the tie-in here to Wildflower Wednesday, hosted by Gail at Clay and Limestone?

At the conference, there was quite a bit of discussion about planting the species of a native plant or wildflower versus a cultivated variety which might have different colored flowers or double flowers or some other changes that a gardener might appreciate.

But after hearing Jim talk about the close relationships between insects and plants, I am in favor of planting the species of native plants when possible, or at least avoiding those native varieties that have changed flower shapes and colors.

Those double flowers and interesting new colors make look pretty to us, but they can create havoc for the insects.

(Update: I would be remiss not to mention that Jim also gave a presentation on goldenrod flowers (Solidago sp.). Someone asked him if goldenrods generally hybridize themselves in nature and he said not usually. I asked him later if he though the Short's Goldenrod (Solidago shortii) in my garden would produce viable seed. He was not sure, given the very specific location where it is found in nature, but said it would be interesting to find out if it does. I guess time will tell!)
insects wildflower wednesday