Guest Post: Garden Fairies Get A Fairy Bath and Look Back at 2010 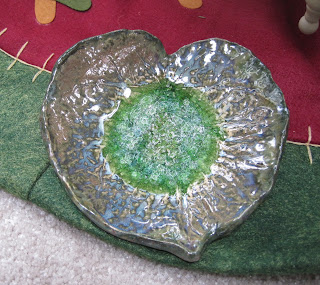 We hope you are still in a holiday spirit these days. We fairies are, but then, we are pretty much always into holiday spirits (wink-wink) celebrating something.

Today, we are writing on behalf of the tree fairies and the toast fairies, though we are still not sure if toast fairies exist or if Carol made them up to cover up that she made toast one day and forgot to take it out of the toaster.

Then when she went to make toast a few days later, the old toast was still there and she blamed "toast fairies". Anyway, if the toast fairies do exist, they are pretty good at hiding because I, Thorn Goblinfly, who can find anything,  looked everywhere and they are not to be found.

Anyway, where were we? Oh, right, we garden fairies have written so much this year on this blog... in fact we have already written six guest posts! We’ll make this seventh one our final one for the year… sort of a recap!

We garden fairies want praise, gifts, adulation, and comments for our hard work!

Do you remember when we wrote about Hortish, the language of gardeners?

Then later in the spring, we got all freaked out when Carol started digging up plants all over the garden! We wrote about how dangerous all this transplanting can be to garden fairies and how Tangle Rainbowfly ended up in a bag of plants dumped unceremoniously at Carol’s sister’s garden.

Many good folks were so concerned about Tangle’s well-being in the land of kids, cats, and dogs, that when he made his great escape and returned to May Dreams Gardens, we wrote a post about that, too. Hooray for Tangle!

Whew, those three posts would have been quite enough for one year, as it was one more than last year, but we garden fairies kept going and contributed to a blog post with Hortense Hoelove and Dr. Hortfreud. That was such fun that we collaborated with Dr. H. and Hortense again on a post about Heliopsis helianthoides ‘Loraine Sunshine’.

Then later, when Carol got back from Dallas, Texas and we got to looking at some of the pictures she took of the pretty gardens down there, we had to write about garden fairy houses. We want some of our own!

We were going to stop posting until we got our houses, as a way of making it known that we are quite serious in our demands for better housing in this garden, but we are garden fairies. We watch over the garden and feel compelled to write when we feel that the welfare of the garden is at stake. So we had to post, yet again, about how slow Carol was in getting out into the garden in the fall to plant bulbs and all.

After we “outed” her on her blog for procrastinating, she sure hustled out there and started planting. We garden fairies never saw someone plant bulbs so quickly!

Then, wouldn’t you know it, we caught her procrastinating again about putting up the Christmas tree and had to write about that, too, on behalf of our brethren and sisteren, the tree fairies.

Which has led us to this final post. We are writing, once again, because we are delighted that Carol got a fairy bath for Christmas, pictured above. It is way too small for her, so we are certain she will set it up for us!

However, we noticed a minor debate on Facebook about whether or not she should heat the water for it in the winter time.

Really, after all we’ve done in her garden and all we’ve written on this blog in 2010, why would that even be a question? 'Nuff said. Case closed. She will heat the water for us. She'd be afraid not to at this point, she is so indebted to us.

From all the garden fairies, we hope you enjoyed our blog posts in 2010 and that you have a most excellent 2011.