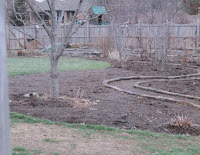 The old rabbit, Ten, stood at the garden gate, leaning on a hoe, at the very spot where he remembered Nine stood a year ago to welcome him. He peered off into the distance for the first sign of that young bunny, Eleven, and then looked back over the garden.

He was proud of what he’d done in the garden. There were new flower and shrub borders just waiting for spring planting and a new larger patio with plenty of room for a water feature, containers of flowers, and seating for anyone who wanted to rest a minute and watch the garden grow.

Ten wished he could have done more – the bunnies were willing, and so was Carol and the garden designer. But the weather didn’t cooperate. First it was too wet, and then it was too dry. And it was hot, too, hotter than Nine had ever experienced. Ten tried to remember all he’d heard about the weather – second warmest April in Indianapolis history, third wettest June, driest August ever, and then one of the snowiest and coldest Decembers that anyone could remember.

He knew there wasn’t much he could do about the weather, but he still thought it worthwhile to remind Eleven that he also wouldn’t have much control over the weather, and not to take offense if people grumbled about it.

He also tried to remember all the other instructions and advice he wanted to give to Eleven. As he stood there and thought about what to say first, he looked down at his heavy bag of hours, days, and months gone by. “However will I drag all of that out of here?”

Just then Eleven came bounding around the corner, an eager, young, energetic bunny, the way Ten used to be. Ten knew their time together would be but a fleeting second, so as quick as he could he began to speak.

“Hello, Eleven, and good to finally see you. It’s been quite a year both in the garden and out of the garden. You can see that I got a great start on some big changes, now it is up to you to follow through on them and do most of the planting. Sorry about leaving you with so much to do, but the weather… oh, and I should warn you right now, the vegetable garden is a real mess but Carol has some… “

And with that Ten hoisted his heavy bag on his shoulder and disappeared around the corner, his words hanging in the still night air.

“Carol has some… whatever could he mean by that”, wondered Eleven, as he hopped through the gate and began to take stock of the situation. Ten was right, there had been some big changes in the garden, and there was still a lot to do.

But Eleven felt young and fresh and energetic and ready for the challenge of continuing the changes in the garden. Like all those who came before him, he brought with him some wisdom from the past, a promise to not let the old ways go to the wayside just because, and an open mind for new knowledge he hoped to gain and pass on to the future.

He also had plenty of resolutions and much to do in his year in the garden. No time to waste!

After his final wave back to Ten, he reached down and picked up the hoe that Ten had dropped on his way out. Off in the distance he could hear the faint singing of “Auld Lang Syne”… ushering out the old and ringing in the new, and welcoming him to his first day in the garden.