The Origin of Tree Fairies 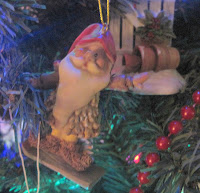 Once upon a time, a garden fairy named Bud Greenleaf was out and about in the daylight, a time when garden fairies are normally hiding beneath shrubs and other low growing plants.

His mama, Bloom Greenleaf, had warned him many times not to go out during the day, but if he did, he should be careful not to be discovered by a cat or a dog, and absolutely to take cover and hide if he saw a gardener in the garden.

Bud remembered his mama’s warnings, but wanted to see a sunflower in daylight, so he stayed up that day, even though he had been up all night, and headed toward the vegetable garden where the sunflowers grew.

Carefully he walked along, following the edge of the flower border, looking all about for cats and dogs when suddenly he realized the gardener was in the garden. As soon as he saw her, he stopped and stared. “Oh, how big those gardeners are”, he said to no one in particular.

No one had ever told him how big gardeners could be.

Just then, the gardener turned and look right at Bud, or maybe she looked right past Bud.

He couldn’t quite tell if he had been seen, but instinctively he turned and fled and ran smack dab into a large tree. Without thinking, he scampered up the trunk, and went from branch to branch until he found a spot where he could rest for a minute to figure out what to do next.

“Wow”, he thought, “I should climb up into the trees more often.”

He stayed in the tree most of the day, enjoying the view and learning so much about the garden. When dusk came, Bud slowly and reluctantly climbed down from the tree and went back home. There he told all the garden fairies of his big adventure and his discovery of the view from the trees.

His tale was so exciting and his description of the view through the tree canopy was so intriguing that he convinced some of the other garden fairies to join him in the trees, and thus the tree fairies were established in the garden.

But then that fall, the leaves fell from the trees, and Bud and the other tree fairies noticed that it wasn’t as much fun to be high up in the trees, swaying in the wind, shivering in the snow, constantly watching out for curious birds looking for a little morsel, such as a tree fairy, to eat.

Just about the time they were planning to abandon the trees and return to being garden fairies, the tree fairies looked down toward the gardener’s house and noticed, of all the curious things, that she had a tree inside, and it was all decorated with colorful lights and garlands and shiny ornaments.

Well, you can just imagine the rest of the story. Bud talked all the tree fairies into leaving the trees and sneaking into the house where, unbeknownst to the gardener, they took up residence in her Christmas tree.

Not willing to just enjoy the warmth of being inside, the tree fairies played amongst the lights, turning some of them off and on without warning, just to watch the gardener’s reaction. And sometimes after a night of drinking and merrymaking, they would toss an ornament or two off the tree just to see what the gardener would do.  On Christmas Even, though, they mostly behaved and took turns watching to see if the Christmas Cottontail stopped with Santa Claus and planted bulbs and seeds in the gardener's garden.

But as everyone knows, Christmas trees don’t stay up for ever, and the tree fairies soon learned this lesson themselves. When the gardener took the tree down, just a few weeks into winter, the tree fairies looked outside at their tree swaying in the wind, covered with snow, and decided that somehow they would stay inside the gardener’s house until spring.

So they took refuge in the house plants and stayed there, mostly sleeping, until spring finally came and the trees leafed out. Then they carefully crept out of the house to return to the shade of the trees to enjoy another season in the garden until the gardener put up her Christmas tree again.


(Bud never did get to see a sunflower up close, but he still has that as one of his goals and hopes he can see one next year.)
fairies holidays humor