In Other News... Winter Continues 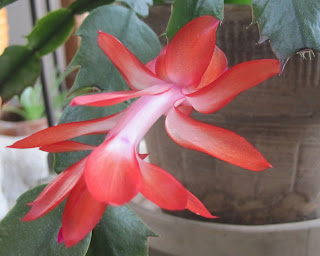 The good news is that my Christmas cactus, which bloomed several weeks ago, provided me with a few bonus flowers this week.

It's funny, but I don't usually have orange flowers outside in my garden, except for a few ditch lilies that I have planted on the side of the house.

I planted the ditch lilies simply because someone gave them to me and they reminded me of driving down to my grandparents' house in the summer. I'd watch out the window as we passed by miles and miles of ditch lilies growing along the side of the road in... the ditches, of all places.

My orange-flowering Christmas cactus is a passalong plant, too. I'll take some cuttings from it this spring to pass along to others. Plant it forward, as they say. 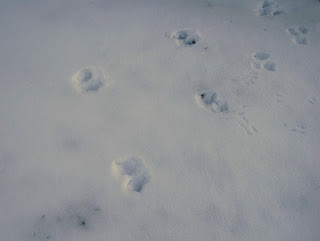 I went out to the garden today and walked around in the melting snow.

Clearly, someone, or something, has also been out walking in the garden.

And where there are two rabbits, there might as well be a hundred rabbits.

I'm sure they are finding all kinds of succulent lower shrub branches to chew off. Go eat the henbit that is coming up, you rabbits, and leave the shrubs alone!

There, that ought to keep the rabbits under control while winter continues. 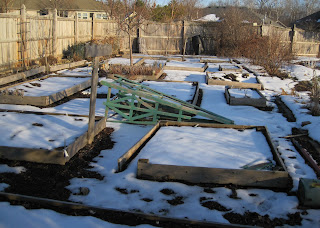 I surveyed the vegetable garden while I was outside looking at rabbit tracks.

It is clear to me that I must replace the raised beds. The trick will be to do it early enough in the spring so that I can still plant peas.

In other words, I must find that sliver of time when the ground is dry enough to work before St. Patrick's Day or risk not having a place to plant the peas, spinach, and lettuce when I normally do.

My Dad always seemed to find such a time in early spring, as I recall him tilling the garden, at least part of it, before he planted peas around March 17th.

In that sliver of time, I'll have someone pull out the old wood around the raised beds, rake the mulch out of the paths, pull out the landscape fabric in the paths, till the whole thing up, form the new beds and edge them with some kind of stone.

Yes, stone of some kind, I think, which will allow for curves, if I decide I want some, and which won't have to be replaced after a few years.

But before that gets done, I'll need to endure a few more winter storms, including one heading this way which is predicted to arrive late Monday or Tuesday and bring with it the most dreaded of all winter elements -- ice.