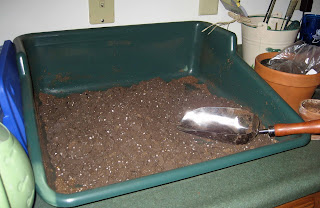 The proper name for it is "Potting Tidy".

I love having a potting tidy because it makes the whole business of potting up plants neater than say, laying out some newspapers and dumping potting soil on the papers.

Really, potting soil on newspapers? How very uncivilized. You are gardening, not trying to make a mess. Do the right thing and get yourself a potting tidy.

Not to mention how fun it is to say "potting tidy" around other gardeners and it is especially fun to throw out the phase "potting today" when talking with non-gardeners. Try it. You'll see.

Potting tidy -- as much fun to say as it is to have.
humor indoor gardening

Gail said…
Tidy potting is one Martha Stewart behavior that hasn't found its way to C and L! But, I do agree with you~it's a great phrase and I can have a lot of fun introducing it to our non gardening friends! xxgail
Mon Jan 03, 08:33:00 AM 2011

Marie said…
I have my potting tidy containers from a relative's hospital stay. If you see people running around a hospital snatching plastic wash basins, you can bet they're gardeners!
Mon Jan 03, 08:34:00 AM 2011

Laura W said…
Eureka! I've searched online to buy one of these in the past and had to just keep trying different terms for the actual item. Very happy to finally know the proper term. Where did you get yours?

I'm also looking for a larger version that I've woeked with before and love. The sides are thin green metal and it slides onto a wooden base? I tried to locate it by the name stamped on the side (which I don't recall) and found zero results. Pretty sure it was manufactured in the UK. Any ideas?
Mon Jan 03, 09:43:00 AM 2011

Potting tidy! Well, they are certainly civilised, assuming you're not lazy like me and know you'd still end up using newspaper! lol.

Ivynettle said…
I've never seen it except on your blog, but I remembered the name.

xoxoxo said…
Ooooh! Any old rubbermaid container would do the trick too! I always put off repotting things because of the mess I have to clean up after... but as a result things die and I kick myself EVERYTIME. Im going to get tidy this year!
Mon Jan 03, 02:09:00 PM 2011

Helen said…
Hey, I have one, and in fact used it just the other day. Had no idea what it was called, though... I just call it a potting tray. Got it at Lee Valley Tools. Not from the catalog (or I'd know it was called a "potting tidy") but from wandering around their store one year. Can't leave Lee Valley without buying *something.*
Mon Jan 03, 11:46:00 PM 2011

Janet/Plantaliscious said…
I love my potting tidy, mainly because I am so bad at tidying up after myself when pricking out etc, and was leaving trails of compost everywhere... I got mine as part of a deal, with a sieve, stool and stand for the tidy, all fitting neatly into the end of my little greenhouse. Heaven.
Tue Jan 04, 05:33:00 AM 2011

Vetsy said…
I have got to have one. The Potting tidy will go on my list of garden tool must haves for this year..

Corner Gardener Sue said…
My husband, who loves neatness, bought one of those for me a number of years ago. Sometimes I remember to use it, sometimes, not. I like to spread out, putting potting soil in several pots at a time. Plus, I am not planting as many smaller pots these days.
Fri Jan 14, 09:19:00 AM 2011