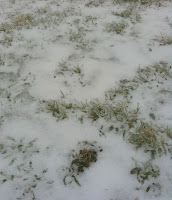 Apparently, here in Indianapolis we may have experienced a cryoseism, also known as an ice quake, in the early morning hours of Thursday, February 10th. I seemed to have slept right through it and missed it, but it's still interesting to know that it might have happened.

The information I read on cryoseisms makes me think that the earth experienced an involuntary shiver, accompanied by a booming noise so people would realize it happened.

I just made this word up by combing cryo, which means ice, with the Latin word for "melt" - fundo.  We will be experiencing a lot of cryofundo beginning this weekend and going on in to next week as temperatures go well above freezing for several days in a row.  As the ice melts, we'll get to see what damage it really caused in our gardens.

This ice melt is just in time because I went to a program on perennials yesterday at the Indianapolis Art Museum, and I'm very eager now for winter to be over and spring to begin.

Not to mention all this cold weather is affecting my mind and causing me to think of sentences likes this one describing the program:

Images of Echninacea of every color and Agastache that might be hardy here made our gardening hearts melt, while pictures of Heuchera and Helleborus made our knees quake at the thought of planting them in our gardens.

I have just written the worst sentence in the history of garden blogging. Is anyone having a contest?

It really was an excellent program and I'll post more about it in the days to come.  For now, just know that if you garden anywhere near Indianapolis and you missed it, you are a dumb bunny.  Oops, that's just winter talking. I didn't mean to imply that anyone who missed it was not a very smart rabbit or anything like that.  But when you hear about the program and the speakers and you weren't there, you'll be more disappointed than a gardener who opens a packet of seeds and finds it is empty.

Which may be the second worst sentence in the history of garden blogging.

Really, we should have a contest for the worst sentence on a garden blog. I'm on a roll, like a tumbleweed tumbling aimlessly about a garden flattened by the ice and snow, with nary a shrub or tree to stop it.

Which may be the third worst sentence...

Some people may quit while they are ahead, others quit so the hole doesn't get any deeper.
humor winter