March 30, 2011
Finally, I have a drawing of the basic shape of the vegetable garden so I can figure out how I want to lay out the raised beds.

The drawing not only reveals the isosceles trapezoid shape of the garden... 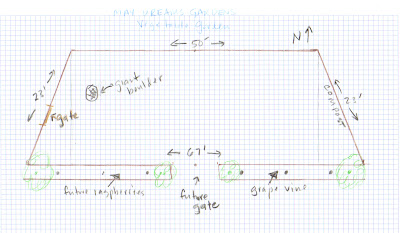 ... it also reveals that I am no artist.

For those interested... a little orientation. If you think you might glaze over reading this next part, you can skip it.

There is a giant boulder in the garden that is too large for anyone to move. I've noted its approximate location and size on the drawing and labeled it "giant boulder".

The entrance to the garden is an opening that is about eight feet, maybe nine feet wide. That's the opening that will be framed by some kind of gate. On the east side (right side as you look at the drawing), there is a viburnum, Viburnum carlesii, a grape arbor with three posts, and another larger viburnum, Viburnum opulus 'Sterile'. On the other side of the opening, I'll mirror that line up, but will plant raspberries instead of grapes.

This weekend I trimmed back the grape vines. I do that every spring. I also ordered some bare-root raspberry plants. I might have jumped the gun on those raspberries, but I can pot them up and let them grow on for a bit until I'm ready to plant them.

The west, north, and east sides of the garden are surrounded by a six foot high privacy fence. On the west side (left side of the drawing), there is a gate that swings out from the garden into a neighbor's back yard. I think of it as an emergency exit and rarely open it.

I'm planning to place the compost bins on the east side of the garden along the privacy fence. There, they'll be partially hidden and won't be the first thing people see when they walk into this garden.

There are also a couple of Clematis vines along the north fence. I moved them there, along with trellises for them to grow on, last spring when I was moving plants around to make way for the garden design changes. Some friends have suggested that if I want to plant apple trees, I should plant espaliered apple trees along that fence.

Now the fun begins... gardening on paper... where my hoe is a pencil and my rake is an eraser.
vegetable garden